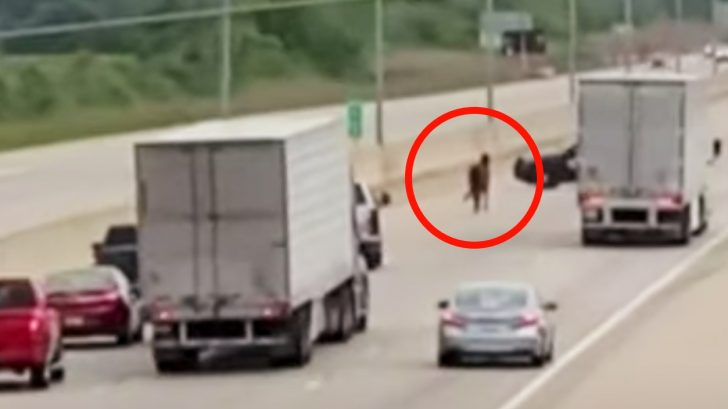 A full-grown horse was spotted galloping down Interstate 75 and backing up traffic in Monroe County, Michigan on Tuesday.

The horse escaped from a nearby farm and Travis had just heard an alert from the Monroe Country Sheriff’s Office that a horse was on the loose.

“I looked and I realized there was a horse running down the entrance ramp,” Travis Larkin, who was driving on the highway during the incident, told Clock On Detroit.

Thinking very quickly, he used his vehicle, along with another man driving a semi-truck, to help block traffic so police could get there and help handle the situation.

Travis said he was “really concerned that someone [would be] blowing by me, and some people just don’t care about when the police are on the road with the lights on. He continued, “The horse could’ve easily jogged across the other side of the interstate and [got] hit by a car, or truck, and it would’ve ended very badly.”

As they blocked traffic, a woman got out of her car with a bucket, assuming with oats in it, and tried to help get the animal under control. Travis said they tried several times to wrangle it but it continued to run away.

“A small white car … kind of corralled the horse against the center median, and then the sheriff came up behind him … They got him under control and someone had a rope,” Travis said. “It was an amusing and lighthearted situation. It wasn’t a bad thing, it was stunning and hilarious. Who expected to see a horse running down the interstate?”

Police said it was unclear how the horse escaped in the first time place, however, it was safely caught and returned back to the farm it came from. Check out the news report below for more details.