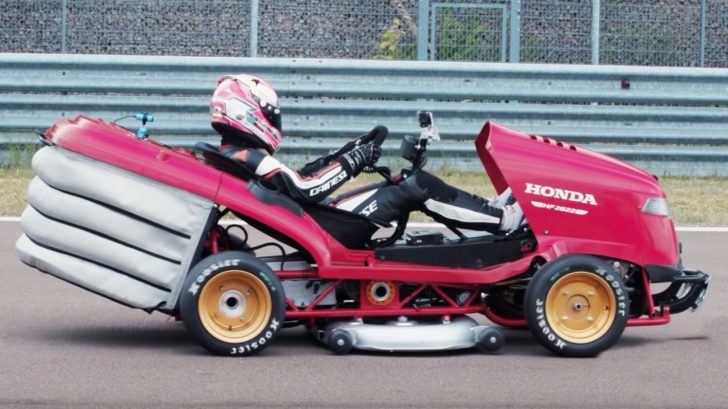 In 2014, Honda came out with a lawn mower called the Mean Mower and took the title of “Fastest Lawnmower.” It topped out at 116 miles per hour.

Just one year later, a Norwegian man built his own lawnmower and broke Honda’s record by topping out at 133 mph. Well, it looks like Honda didn’t want to be outdone!

Fox reported on June 14 that Honda just reclaimed their top spot for “Fastest Lawnmower.” They created the Mean Mower V2 and put it to the ultimate test.

The requirements for this title are:

-Must look like a lawnmower
-Must be able to cut grass

A stunt driver named Jessica Hawkins drove the lawnmower, which met Guinness’ requirements listed above. Guinness took the average of two runs in opposite directions, completed within an hour of each other, as the final time. The goal was to see how fast the Mean Mower V2 would get to 100 mph.

Her first run was 6.43 seconds, and her second run was 6.12, giving her an average on 6.285 seconds, which gave Honda the Guinness World Record title.

Fox reports that the Mean Mower V2 tops out at a whopping 150mph! For reference, a normal lawnmower goes about 4 mph.

The reason the lawnmower is so fast is because it has a four-cylinder, 200-horsepower engine, the same that is in Honda’s Fireblade.

Watch the epic video below.