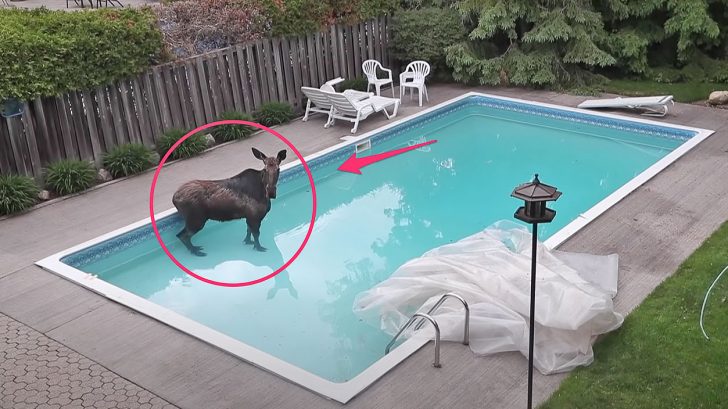 Ottawa resident Paul Koch had the surprise of his life when he discovered an 800-pound moose swimming in his pool Friday morning May 29, 2020. The moose spent several hours swimming around which led the homeowner to wonder how the animal even got there.

“It’s still a mystery to me how she got in the backyard. She’d have to jump a minimum of a five to five-and-a-half-foot fence to do it.”

Around 10:30 a.m., Koch said the moose climbed out of the pool, ran across the yard and hopped the fence into another yard, and eventually disappearing.

The only damage caused by the incident was the giant hole the moose tore in the pool lining but Koch believes it was well worth the experience and said it was the highlight of his 40 years as a homeowner.

The weight and size of moose generally range from 800-1500 pounds and can stand anywhere from 7 to 10 feet tall. In general, moose will only be aggressive and charge a person if they’re too close, or to protect their calves, or if they feel directly threatened. While it might be difficult if they’re in your swimming pool, it’s important to leave wildlife alone and observe from a safe distance just like Koch.

The Koch’s woke up to a full grown moose in their pool. Ministry of natural resources is on their way. It’s been about 2 hours. #ottnews @ctvottawa pic.twitter.com/1OXCFSgtNh

Watch the news story of the moose below!