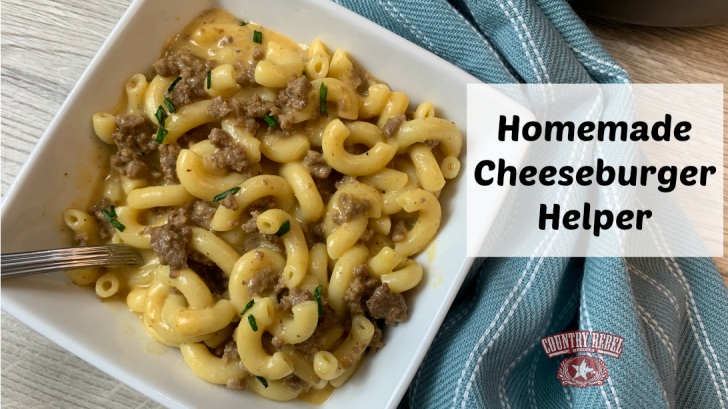 It’s been nearly 50 years since Hamburger Helper was introduced and forever changed the way families eat. Created in 1971, the handy meal was developed in response to meat shortage and high meat prices. The fad food has been around ever since and has seemingly only grown in popularity.

In the years since its introduction, Hamburger Helper has been joined by other “helper” boxed meals such as Tuna Helper and Chicken Helper. The concept is simple….the box comes with dried pasta and seasonings. All the cook has to do is add the required meat and voila! Supper is ready.

As easy as the boxed meal is to prepare, you may be surprised to learn that making a “helper” meal from scratch is just as simple, and it’s tastier! We took our favorite Hamburger Helper flavors and added a super helping of shredded cheese to make Homemade Cheeseburger Helper. With only one pot and about 30 minutes, supper was on the table. And, it didn’t last long as everyone in the Country Rebel kitchen was begging for seconds. We strongly suggest you double this recipe so there’s plenty to go around!

Instructions
Brown the beef in a large skillet or stock pot over medium heat. Drain off any grease and return the pan to heat.
Stir in the ketchup, mustard, garlic powder, onion powder, salt, pepper, noodles and broth. Bring to a boil then reduce heat to a simmer. Cover and simmer for 15 minutes or until noodles are tender.

Remove from heat and stir in the sour cream and cheese. Stir until cheese is melted and well combined. Enjoy!