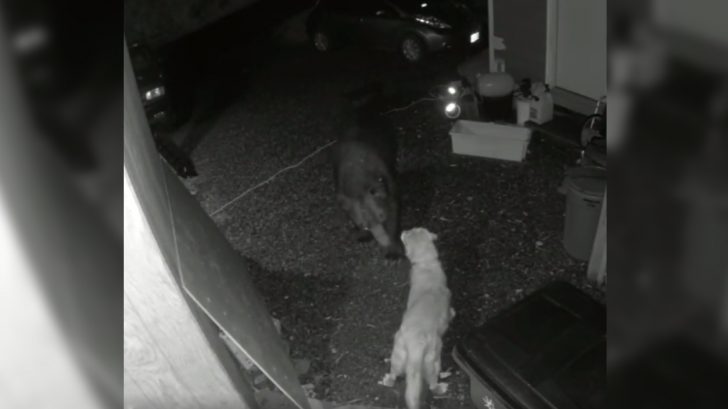 Pretty the 11-year-old golden retriever was hailed a hero in Sitka, Alaska after standing guard when a massive brown bear entered through the garage of his family’s home.

It was about 11:30 at night and the garage door was open but Pretty blocked the bear from entering the home by standing in its way. He stood his ground, barked, and bluff charged the bear as it slowly walked towards him.

The golden retriever definitely showed the bear that he was not scared of it even though it was much bigger than him. Pretty was not playing around and he let it know he did not want the bear on his property.

The curious wild animal sniffed and investigated the dog cautiously but when it got too close, Pretty snapped at the bear causing it to flinch and jump back.

The security camera in the garage captured it all on camera and showed the coastal brown bear, often referred to as a “grizzly,” eventually getting scared off by the dog’s barking. The bear took off running into the darkness with Pretty right behind it barking all the way until it left the property.

The homeowner later posted the video on Facebook showing just how brave her beloved pooch is. She’s even calling him a legend.

“Changing Pretty’s name to Legend! He has always been a good bear dog,” Nicholas Galanin said on Facebook.

Watch The Security Footage Below