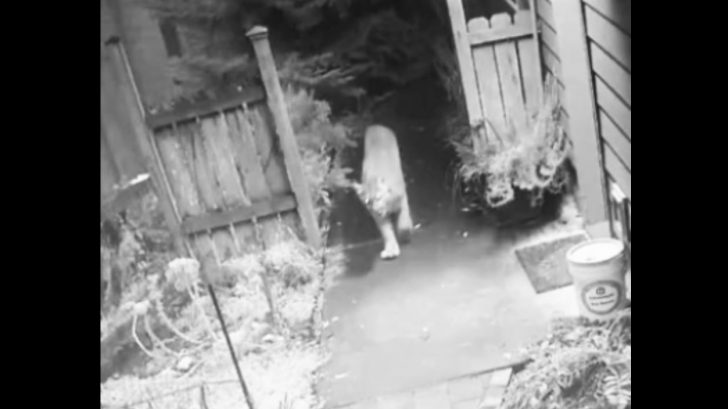 Mark Nelsen has seen his fair share of wild animals on his property in Oregon. But he was still a bit shaken when he recently reviewed the footage from his security cameras and saw a giant cougar in his yard!

Nelsen works as the Chief Meteorologist for Portland-based news channels KPTV & KPDX. So he knew he had to share the video of the cougar with his nearly 30,000 followers.

The short clip shows the animal walking through Nelsen’s yard on Monday morning (January 18). Nelsen has seen bobcats and even bears on his property in the past, but this cougar sighting was a new thing for him.

“Meeeooow! I’ve always known there are animals wandering around the woods,” Nelsen wrote. Plus I’ve seen: bear, bobcat, raccoon, mountain beaver, and elk on our property. But this was a bit jarring.”

Nelsen said the cat walked past his back door. Can you imagine if he chose that moment to step outside without knowing a cougar was inches away?

The cougar seemed to be quite large, which made its appearance in Nelsen’s yard all the more shocking. Nelsen pointed out a bucket next to the door, saying, “For size comparison…that is a large 5 gallon bucket.”

You can see just how big the cougar was by checking out Nelsen’s video below.

While some of Nelsen’s followers said it was “scary” to see the cougar outside his back door, others noted how it was a beautiful creature. We can admire its beauty, but admit we would have been a little scared to see a cougar in our yard!