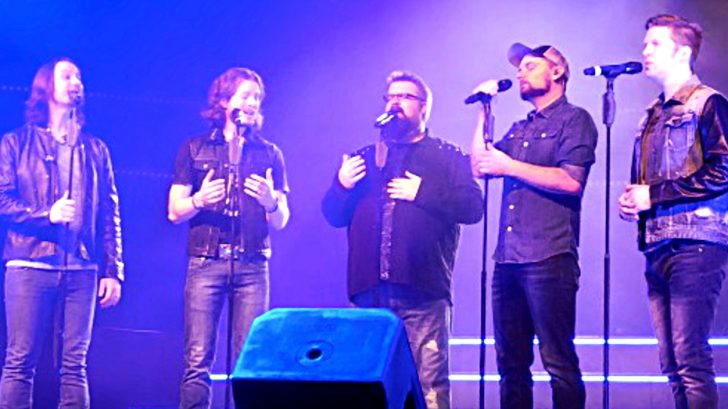 In country music, few songs carry the same emotional power that you can find in Vince Gill‘s “Go Rest High on that Mountain.” Written entirely by Gill, he started the song after the tragic passing of fellow country music star Keith Whitley.

While Gill started the song for Whitley, he finished it for his brother, Bob, who passed away in 1993 after suffering a heart attack. Following its release in 1995, the song climbed as high as the 14th spot on the Hot Country Songs chart.

Today, “Go Rest High” is known as one of Gill’s greatest songs. Over the years, he’s brought the song back to honor country music artists and friends who have passed away, including George Jones and Arnold Palmer.

If you loved “Go Rest High” before, just wait until you hear what country a cappella group Home Free did with the song at one of their shows in 2018. Bass singer Tim Foust introduced the song to the crowd before they sang, saying, “It’s one of the most beautiful songs ever written.”

From there, the group moved effortlessly into their performance of “Go Rest High,” with Rob Lundquist leading as the featured soloist. His fellow Home Free members provided support with their harmonies, which were nothing short of stunning.

Then, midway through the performance, Home Free slipped in a surprise that surely sent the crowd to tears (if they weren’t crying already). Foust jumped in to take the lead at that point, and started to sing a short, passionate snippet of “Amazing Grace.”

After Foust finished, the rest of the guys jumped back in to finish singing “Go Rest High,” bringing the performance to a brilliant conclusion.

We’re sure there wasn’t a single person in the crowd who didn’t have tears in their eyes before the performance was through. You’re due to start crying when you watch it as well…

Home Free later went on to record their unique arrangement of “Go Rest High” and “Amazing Grace,” and released that video in 2020. You can check out that video and the group’s 2018 live performance below.