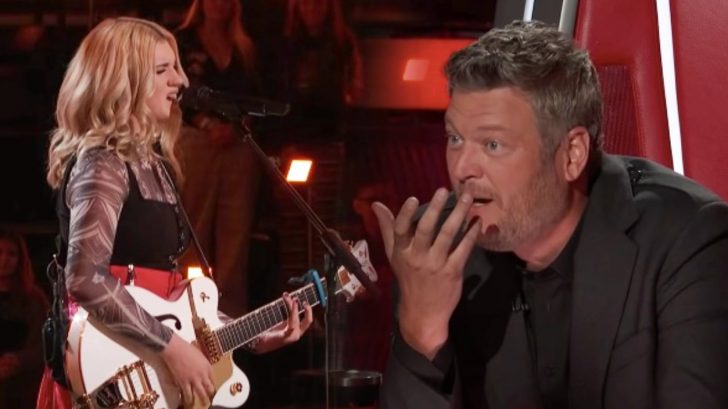 In March 2019, Blake Shelton released a song that would go on to become one of the biggest hits of his career…”God’s Country.”

“God’s Country” was written by Devin Dawson, Jordan Schmidt, and Hardy. As soon as Shelton heard the song, he knew he had to record it:

“I was actually here in Oklahoma, on the ranch, and I’ll never forget it,” he said in a behind-the-scenes video about the song. “I was actually running a skid steer, and they sent it to me. I was shocked. I had to stop and just listen to this song, because the song was talking to me about a place that I was in at that moment, which was a place in the middle of nowhere that meant something to me that probably nobody else could ever understand, what that is and what it is inside of me and what my connection is to the land.”

“God’s Country” ended up reaching the #1 spot on both of Billboard‘s country charts. It also crossed over to claim the 17th spot on the all-genre Billboard Hot 100 chart. The song has since been certified 4× Platinum by the RIAA.

Later in 2019, “God’s Country” took home the trophy for Single of the Year at the CMA Awards. The song was also nominated for Best Country Solo Performance at the 2020 Grammy Awards.

During Season 17 of The Voice, Team Gwen‘s Rose Short delivered an impressive cover of “God’s Country.” Shelton was pleased with what he heard, and called her performance “incredible.”

One contestant on Season 21 followed in Short’s footsteps by opting to cover “God’s Country” during the knockouts. That contestant was Hailey Green, who just so happened to be a member of Team Blake.

But she was up to the challenge, and delivered a fierce performance that earned a wealth of praise from viewers after her knockout aired. She also received some nice compliments from Shelton, who said, “Hailey, I’ve literally lost years off my life trying to get through that vocal, and listening to you sing that, holy crap.”

Even though Green delivered a rockin’ performance of “God’s Country,” Shelton ended up naming her competitor, Libianca, as the winner of the knockout. Green wasn’t stolen by any of the other coaches, so her Voice journey ended there.

At least Green left the Voice knowing she gave her final performance her all. Check it out in the video below.

What did y’all think of Green’s rendition of “God’s Country?”