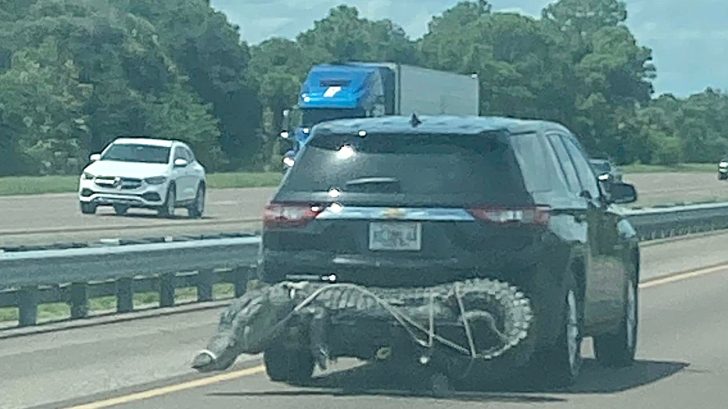 Karen Kress was driving down Interstate 95 over Labor Day weekend when she spotted what looked like an alligator tied up to the back of an SUV that was going 70 mph.

She posted the video on Facebook saying that it happened on September 3rd in Brevard County, Florida and showed the reptile almost double the width of the vehicle, forcing the driver to fold its tail around and hogtie it.

“Definitely disbelief!” Yahoo reported Karen saying in her initial reaction. “I moved here 30 years ago because of the nature and never tire of seeing an alligator. However, never expected it to spot one on the interstate!”

Other people driving past the animal were very surprised by the bizarre situation and also took photos. Social media had a lot of questions about the situation as well with many of them offering “tailgator” puns and jokes about the hunter’s situation, clearly defying Uber standards.

“Well it’s not going in the cab,” Andrew Armbruster wrote on Facebook.

“Clearly, that wasn’t going to fit in the passenger compartment,” Robert Lockwood posted.

The photo even riled animal rights activists, some of whom called it animal cruelty. Others questioned whether it was an elaborate hoax by the driver.

“Is that an actual real gator, or a pool float?” Erin McGirt Chantry asked.

“That gator does not look real!” Kristine Tragesser posted.

Karen confirmed that she drove up really close to get a good look at the alligator and reported that it was  “totally real.”

“Despite me being a vegetarian, I don’t have a problem if this was a permitted legal hunt,” she added.

Florida’s alligator season started on Aug. 15 and runs until November 1st. The driver of the car is still unknown but we can say the hunter was likely participating in the alligator season hunt.