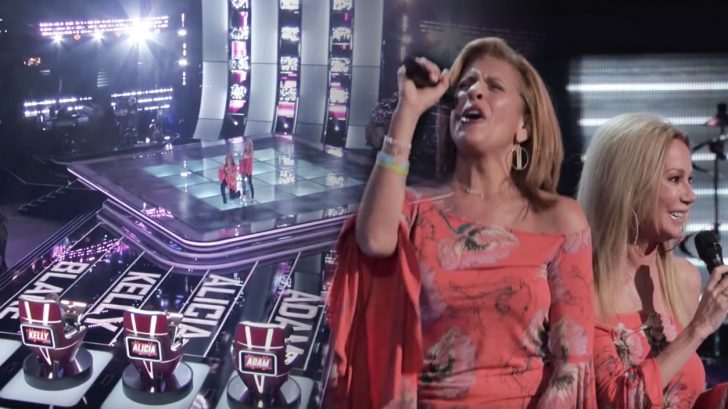 Their puzzled looks say it all in this twist on one of the most popular singing competitions to hit television!

For the 14th season of The Voice, hosting network NBC decided to switch things up for these coaches and throw them a curveball they never saw coming – one that had all of them howling with laughter by the end!

Blake Shelton and Kelly Clarkson had some of the most baffled and confused expressions of all four coaches when they heard a mysteriously-familiar voice ring out across the loudspeakers. As far as they could tell, this was an older woman singing the treasured James Taylor & Carole King ballad, “You’ve Got a Friend.”

It wasn’t until they heard the second voice pick up the next verse that their ears really perked up and they got insanely curious. In a very amateur way, they could tell this was a different type of audition than they were used to – but they couldn’t put the pieces of the puzzle together quite yet.

Curiosity got the best of Clarkson and returning coach, Alicia Keys so they both pressed their big red buttons. When they spun around and saw what had actually been going on behind them they let out some of the biggest laughs and loudest screams y’all have heard!

#OpryStarOnTV: Cheer on Team @blakeshelton in tonight's premiere of @NBCTheVoice at 8|7c on @nbc! ? pic.twitter.com/kB7VIMwh7x

Standing center stage was none other than beloved Today Show hosts, Hoda Kotb and Kathy Lee Gifford! These two television stars were trying their hand at singing and shaking up the competition with this fun little group they so lovingly named, “The Wine-os”!

Watch their full video below and see the coaches’ reactions for yourself!