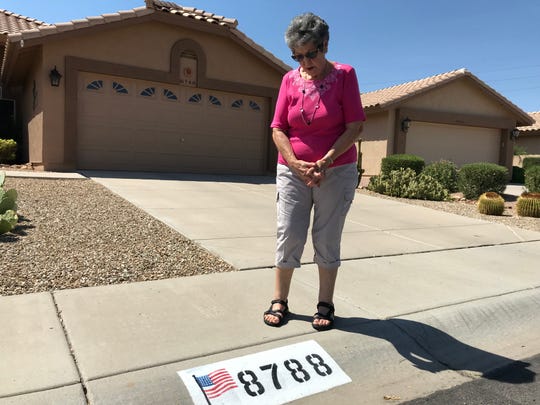 Remove Her American Flag From Her Home

In a world where political tensions are at their highest, here comes a story about a homeowner who was told by the Home Owners Association (HOA) to remove her American Flag from her home number on the curb.

Patriotic 82-year-old grandmother Donna Cordero lives in Westbook Village located in Arizona among a small quiet suburb of about 4000 houses. In February she was asked by a firefighter why no one in her neighborhood had their house number painted on the curb. She called the Westbrook Village Homeowners Association and they said it wasn’t their responsibility to paint the address on the curb. If she wanted it done, then she’d have to do it herself.

“I thought, wouldn’t that be nice to let people know that the person who lives here still believes in the flag,” she said.

Donna Hired a Company to Paint Her Address & Flag

Donna decided to hire a company that would paint her address on the curb along with her choice of artwork to the side of it. Being a widow of two veterans, one of them who was wounded in World War II, and both of them were buried in the National Memorial Cemetery of Arizona, she decided to get the American flag painted beside her address.

However, after she did it, the HOA was doing a routine patrol and saw it. They then reached out to Donna telling her that the flag had to be removed because it didn’t maintain the “look” of the neighborhood.

“I couldn’t believe it,” Donna said. “I’m thinking, ‘Are you joking?’ Of all the things they pay attention to in this community, they’re looking at my little flag? It absolutely upset me. My neighbors that I’ve talked to can’t believe it either.”

HOA Says It’s Not About The Flag

The representative of the Westbrook Village Homeowners Association said that it’s not about the flag but it specifically says in the guidelines of the HOA to not put “decorative artwork” on the curb.

“This has nothing to do with being anti-American,” said Tom Canepa, the HOA’s vice president. “We have many residents who fly the flag properly and proudly and the HOA itself has been recognized for our appropriate displaying of the American flag.  It has nothing to do with the flag. It has to do with fact that the standard is very clear in saying no decorative additions on the curb.”

Donna said she will not be removing the flag from her property and until this day we haven’t heard about anybody else removing it either. She went on to say: “You’ve got to stand for something or you will fall for nothing and I’m not going to fall for nothing. This is my property and I just can’t believe anybody would find that flag offensive.”

Do you think that HOA has gone a little too far with telling Donna to remove her American flag from her property or do you think the rules are the rules and she should remove it?

#NEW ???"AMERICAN FLAG HAS TO GO!!!" HOA says It doesn't maintain the neighborhood's 'look'….82 Year Old Widow Of 2 Veterans, Donna Cordero, is Fighting the Westbrook Village Homeowner's Association's Order Forcing Her To Remove The American Flag Painted On Her Curb….Do You Agree With The HOA?Christina Aguayo Newshttps://americasvoice.news/video/5d3f73aba3ee8/ ? Courtesy AZCentral