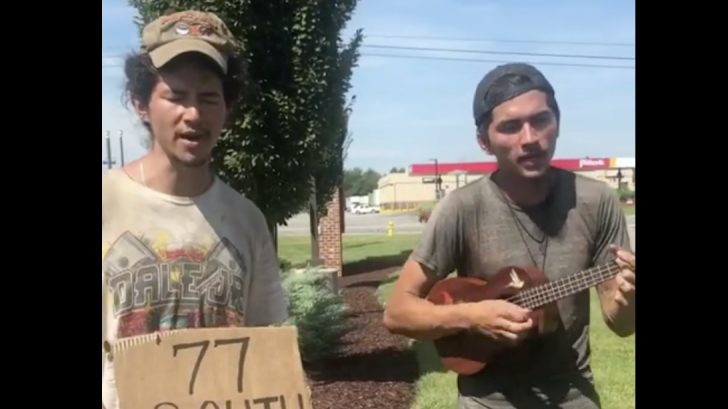 We all know that NASCAR and country music go hand in hand, but a recent meeting between a NASCAR team owner and two hitchhikers took it to a whole new level.

NASCAR team owner Dwayne Gaulding was passing through North Carolina last week en route to Virginia when he came across a couple of hitchhikers. One of the men was holding a sign that read “77 South.” The other was playing a ukulele. Gaulding was traveling the opposite direction of the men so couldn’t offer them a ride, but what he did instead has taken the internet by storm.

While addressing the hitchhikers, Gaulding turned on his cell phone camera and said, “Got a couple of guys here laughing, having a good time,” he said to the men originally from Georgia. “You’ve got a sign that says 77 South. I’m headed north, to Virginia, so I’m no help to you guys.”

Gaulding then made the men an offer they couldn’t refuse. “I don’t know if y’all know a little ‘Wagon Wheel.’ If you play a little ‘Wagon Wheel’ I might be able to help you out with a little money,” he said of the Old Crow Medicine Show turned Darius Rucker hit song about hitchhiking.

Without hesitation, one of the hitchhikers began to play the ukulele and sing the familiar words as his friend joined in. When they were done, Gaulding handed them a $20 and a promise to pray for them as they travel.

Gaulding posted the video to Facebook along with a message encouraging people to share the video so these guys can inspire more people. There’s only one issue with the video….nobody seems to know who these guys are. Thousands of people have shared and reacted to the video, but so far the hitchhikers’ identities are still unknown.

Check out the video that has everyone talking below!

So I am at Sheetz in Troutman NC getting gas and hear 2 guys laughing and talking about there journey and how tuff it's going to be.. one of the guys had a guitar the other a sign that said 77 South! I figure I am going to have a little fun with these guys and see if they can sing my Dad "Whirleys" fav song "Wagonwheel" and trust me they killed it! Best 20$ I have spent in a long time! Share this so these guys can inspire more people! #americanidol #livingyourdreams #giveahelpinghand #letitbe #justdoit #NASCAR