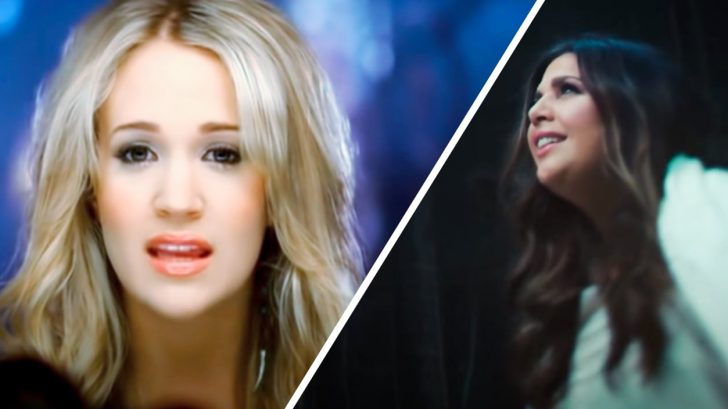 Did you know that Dierks Bentley thought about recording “Drink a Beer” before it eventually went to Luke Bryan? Or did you have any clue that “The House that Built Me” was intended for Blake Shelton before Miranda Lambert cut it?

Many of your other favorite country songs were once meant for or offered to someone else. Another such song is “Jesus, Take the Wheel.”

“Jesus, Take the Wheel” was released by Carrie Underwood in October 2005 as her second-ever single (the first off of her debut album Some Hearts). Underwood turned the faith-filled song into a #1 hit on the Hot Country Songs chart.

The song was a hit outside of the country music world as well. It went on to claim the 20th position on the all-genre Billboard Hot 100 chart. It has since been certified triple Platinum by the RIAA.

“Jesus, Take the Wheel” led Underwood to numerous award nominations and awards. One of the most notable accolades she received was the Grammy for Best Female Country Vocal Performance.

After such extraordinary success, it’s hard to imagine anyone else but Underwood as the voice behind “Jesus, Take the Wheel.” But it turns out the song was offered to other artists before Underwood won American Idol and burst on the scene.

According to Wide Open Country, Sara Evans had the chance to record the song, but passed on it.

Another artist who nearly sang “Jesus, Take the Wheel” was Hillary Scott. She was a solo artist then, though she’d later go on to become one third of the group Lady A.

As Scott told Taste of Country, she had a development deal with a record label at the time, and “Jesus, Take the Wheel” was one of the songs pitched to her.

“It was one of my favorites, and then that was all right in the time [Underwood] was on American Idol,” Scott said,

But Scott didn’t end up recording the song, and never released material from her development deal. After Underwood won Idol, she recorded “Jesus, Take the Wheel,” and the rest is history.

Scott isn’t upset about the missed opportunity she had to record what has since become an iconic country song. As she told Taste of Country:

“It’s neat to have watched the journey — the journey of that song — because they all have their own.”

Even though Scott didn’t record “Jesus, Take the Wheel,” she later released a gospel record that contained the song “Thy Will.” It went on to win the Grammy for Best Contemporary Christian Music Performance/Song. Check out the song’s official music video below.

The year after “Jesus, Take the Wheel” was released, Scott joined Charles Kelley and Dave Haywood to form Lady A. The group was recently asked to join the Grand Ole Opry, so we’d say things turned out just fine for Scott.