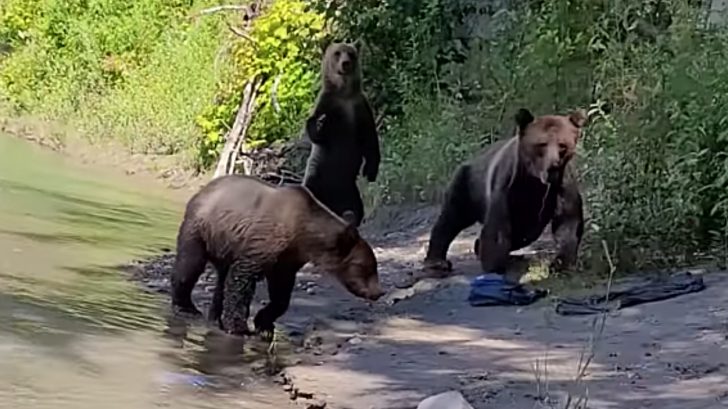 Canadian hiker Joey Ford had an incredibly close encounter with a charging mama bear in Kitimat, British Columbia while out on a hike in the Lower Dyke Road of the Rocky Mountains.

The hiker said she was out for a day hike in the sun while watching people fish along the river when she spotted three bears in the distance walking her way.

Initially, the bears appeared to be minding their own business walking along the riverside. Joey believed that she would be able to let them safely pass by. However, as one of the bear cubs got closer, the mama bear suddenly charged at Joey.

She immediately began to make noise and wave her arms to try and deter the bear. Despite her efforts, the bear continued to charge in her direction and she was only able to escape by jumping into the river water.

This is not the first time that a bear has charged at a hiker in the area, and park officials remind hikers to be extra cautious and to always carry bear spray and make noise while hiking.

They also advise to not hike alone and if possible, to hike in a group and especially with a knowledgeable guide. It’s also important to note that Kitimat, British Columbia is known for its dense forest and wildlife, so hikers should be extra cautious when hiking in this area.

In conclusion, it’s important to understand and respect the wild, it’s also important to know how to react and be prepared for any potential encounter with wild animals, especially bears.

Remember that bears are wild animals and should be treated with caution and respect. It’s also important to be aware of the location you’re hiking, and take extra precautions when hiking in known wildlife areas like Kitimat, British Columbia.

Watch The Charging Bear Footage Below