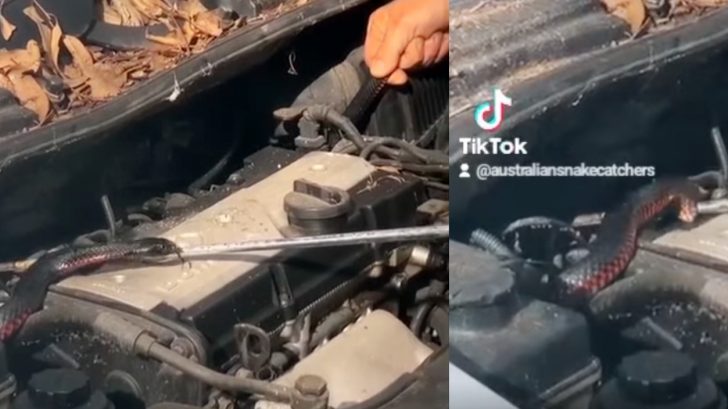 Australian Snake Catchers released a video showing the amazing moment a red-bellied black snake was removed from the engine of a local’s car who was attempting to use their vehicle.

“In this case the snake was originally underneath the car attempting to get some shade but due to the activity by the homeowners, it retreated upwards into the engine bay,” Sean Cade, from the Australian Snake Catchers, told Newsweek. “It’s always a tricky removal when dealing with a highly venomous snake in a confined space.”

The incident happened on a property located in New South Wales and the footage showed a 4ft red-bellied black snake popping its head up from the engine of a parked car that was on the front lawn in the suburb of Llandilo, Australia.

“There have been many cases where we have to remove snakes from cars mainly due to people attempting to approach or harm or catch the snake and it retreats into the car’s engine bay or underneath parts of the car. And the odd one or two inside the car,” Sean said.

The car owner said that they spotted the snake laying under the car and tried to scare it away. However, it ended up crawling up into the vehicle’s engine, causing the car owner to call professionals for help.

“Snakes will seek shelter in lots of places including cars as they are purely defensive creatures,” Sean said.

Australian Snake Catchers were notified of the scenario and were the first ones to arrive upon the scene ready to handle the situation.

The video showed the reptile handler easing the snake out of its hiding place of the vehicle’s engine with a hooked pole. The red-bellied snake’s head emerges from the engine as the snake handler pulled on its tail, trying to get it out.

The agitated snake then started biting the metal pole. It’s wild! You can watch the full video below!