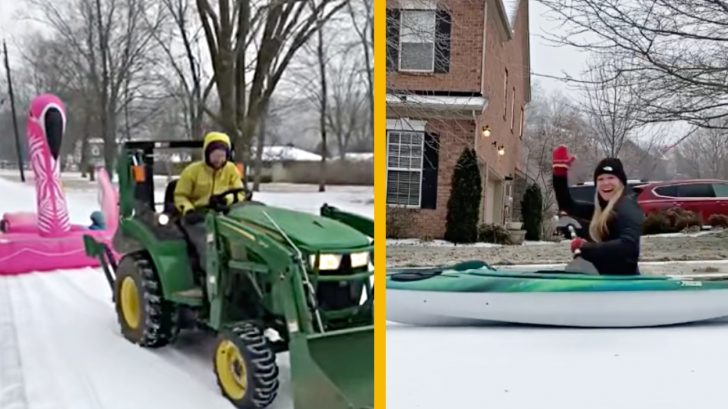 Are you looking for a way to mix up your snow day activities? Southerners have some ideas.

A blanket of snow is practically an urban legend for the Southern States, so when this year’s unprecedented ice storm rolled in, few people had sleds or snow shovels. Of course, that did not stop Southerners from enjoying the snow. Check out the videos below to see some of the most creative snow day activities!

In Goodlettsville, TN, a neighborhood traveled in style! A group of people road down the street inside a giant flamingo pool float, carefully driven by a tractor. The ride was so smooth that one of the parents even fed their baby a bottle during the icy adventure.

Nashville proved once again that they are a hockey city! The icy roads gave hockey players some extra practice time.

While the icy roadways made it dangerous to travel, a Nashville woman found a fun way to cheat the system. The woman waves at a camera while sledding down the road in a kayak. Behind her, a man hilariously slips as he chases behind her.

For more fun ways to enjoy the snow, check out the video below!