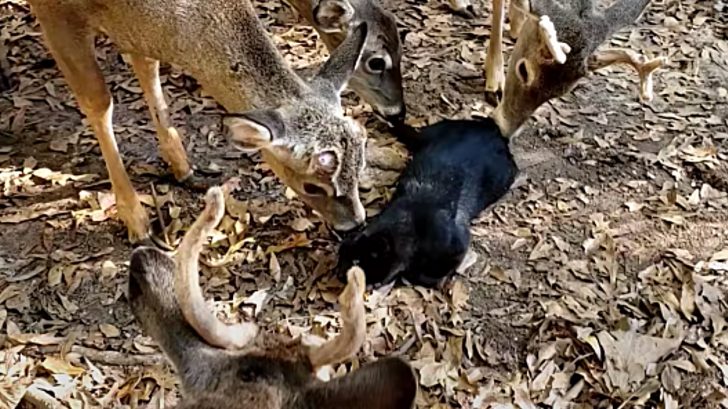 A video recently surfaced on YouTube showing the interesting moment a herd of deer surrounded a black house cat and began licking it all over its body.

The footage showed the cat laying outside on the ground as four deer stood beside it and continuously licked the feline.

Many people were asking and wondering why the deer was licking the cat like that and there was someone who spoke up that gave a logical answer that might make sense.

A woman named Aubrey, who may potentially be the owner of the cat in the video by the way she was commenting, said that cat dander is very salty and that’s why the deer like to lick her cats.

“Don’t ask me how. That’s why they love this. It’s a natural salt lick for deer. My 3 cats love their deer herd that come through our yard each early morning..I never have to clean my cats after them,” Aubrey wrote on YouTube.

Aubrey continued to explain that she’s only a paramedic and not a vet, but she said all skin cells are somewhat alike, they include a high amount of sodium chloride (a.k.a salt).

“My cats LOVE being licked by the deer. It took a very long time for them to trust each other though,” she said.

Watch Footage Of The Deer Licking Cat Below