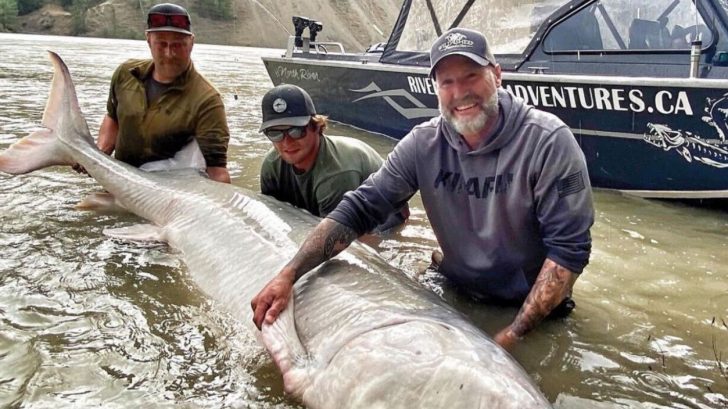 Canadian fishermen Steve Ecklund and Mark Boise joined tour guides Nick McCabe and Tyler Speed on an epic fishing excursion that landed them the largest fish ever recorded to be captured out of the “middle portion” of the Fraser River.

The fish was a massive white sturgeon weighing nearly 700 pounds, was 10’1″ long, had a girth of 57 inches, and was estimated to be around 110 years old.

It was caught near Lillooet, B.C., on Father’s Day, and the team said they had caught a few other big sturgeon fish but none of them came close to the 700-pounder.

After hooking onto the beast, it took the fishermen on a two-hour, one-mile, upstream fight to tire it out before they could get next to the boat so they could weigh it, measure it, and take pictures.

“The sturgeon jumped out of the water multiple times, and that’s when they realized how big this dino actually was,” River Monster Adventures spokesperson told CTV News.

According to River Monster Adventures, even though the fish was estimated it be 110 years old, the sturgeon had not been tagged, suggesting that this was probably the first time it had ever been caught.

“Steve and Mark have never fished the Fraser, so it was a fish of a lifetime,” the spokesperson said.

The team quickly took photos with it and released it back into the Fraser river so it could, hopefully, go on living many more years.

White sturgeon have existed relatively unchanged for millions of years and are the largest freshwater fish in Canada, according to Fisheries and Oceans Canada.

Watch Footage Of The Majestical Animal Below