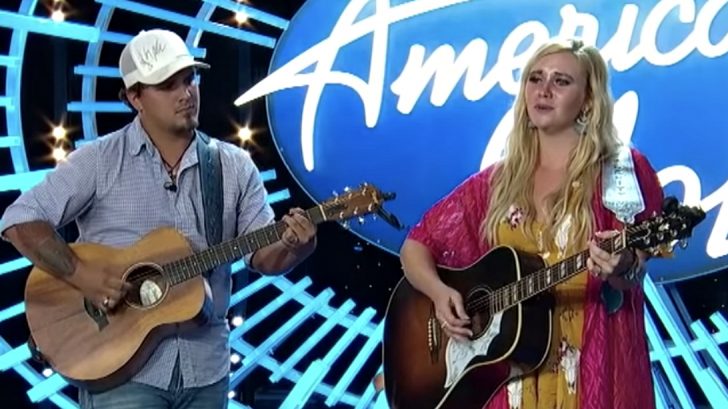 During Sunday night’s American Idol episode, husband-wife country duo Treble Soul auditioned for a coveted ticket to Hollywood. They entered the audition room together and each took their turn singing, but only one of them advanced in the competition.

Treble Soul was born when Texas natives Hannah Prestridge and Curt Jones met while singing on Broadway in Nashville. After being introduced to each other by the owner of the legendary Tootsie’s World Famous Orchid Lounge, the pair became a duo…in music and in life.

A few months into their relationship, Hannah became pregnant. During her pregnancy, Hannah began having kidney problems that led to becoming addicted to hydrocodone. Even though the couple’s daughter was born healthy, Prestridge felt herself “spiraling out of control.”

“After I had Presley, I wasn’t just getting the hydrocodone from the doctors. I would get it from friends,” Hannah admitted. “I was spiraling out of control.”

“I watched the most beautiful woman I’ve never seen in my life kind of fade away into this ghost I never really knew,” Jones says.

Hannah said that she was “messing up everything,” including Christmas for her family when she didn’t show up to put presents under the tree. This led to her husband giving her an ultimatum: Hannah had to fix herself or he was leaving with their daughters.That ultimatum prompted Prestridge to get sober.

Hannah marked the one year anniversary of her sobriety by auditioning for American Idol alongside her husband. Hannah performed an original song about the tough times she and her husband Curt had been through. Jones auditioned with a cover of Travis Tritt‘s “Help Me Hold On”.

When it came time for the judges to make a decision about advancing the couple to Hollywood week, Katy Perry asked what would happen if they both didn’t receive golden tickets. “Would you both have to go through?” she asked.

“No,” Jones replied. “We already talked about it, and I’d support her no matter what.”

The judges praised Curt Jones for being a “great man” and encouraged him that his role would be to support his wife on her Idol journey. “I think your role right now might be to be her rock,” Luke Bryan told Curt.

The judges unanimously agreed to send Hannah Prestridge through to Hollywood week. The news was bittersweet for Prestridge who had dreamed of competing on American Idol since she was 6-years-old.

Curt praised Hannah saying, “She deserves every bit of this more than anybody I’ve ever met in my life. So, I’m looking forward to watching her journey.”

Watch Curt Jones and Hannah Prestridge’s full audition in the video below.