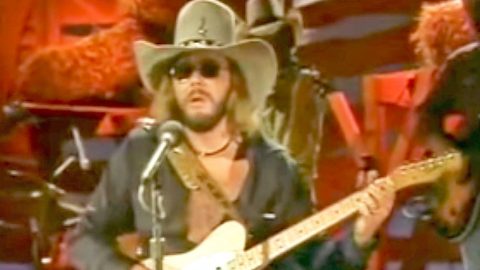 With a career spanning over six decades, Hank Williams Jr. has been given the opportunity to write and record songs about all sorts of subjects. But as a country singer through and through, you can bet that he has recorded more than his fair share of songs about heartbreak.

Since country singers often opt to write and sing songs about real-life feelings, heartbreak tends to be the first one they gravitate too.

There are plenty of well-known heartbreak songs out there, and many others that are hidden gems.

One song that falls into the latter category is Hank Jr.’s “The Last Love Song.” The song was included as the opening track on of Hank Jr.’s album of the same name, which was released in 1974.

“The Last Love Song” was released as the lead single off of the album, and peaked at the fourth spot on the country chart. But in Hank Jr.’s sea of number ones and other big hits, “The Last Love Song” hasn’t received as much attention as the years have passed.

If you’ve never heard this song before, you best be prepared, because it’s one emotional roller coaster.

Got Some Tissues? Good, You’ll Need Them

Hank Jr. opens the song by speaking to his lover, saying how he’d like to sing her one last love song before she leaves for good. He then proceeds to tell her everything that he will miss about her once she’s gone:

“Tomorrow when I wake, what will take the place, of smiles on your face and black hair against white lace?”

The song comes to a heartbreaking conclusion, as Hank Jr. sings of his hope to one day find “a love that won’t die.” It’s a sentiment that anyone who has ever had a broken heart can relate to.

That sentiment comes through even stronger when you watch Hank Jr. sing the song live. He once sang it during a televised appearance in a performance that is sure to have you hooked from the first note.

Tune in below to take a trip back in time and watch Hank Jr. sing “The Last Love Song.” Don’t be surprised if you find yourself with tears in your eyes by the end. It’s seriously that good, and Hank Jr. sings it that well.