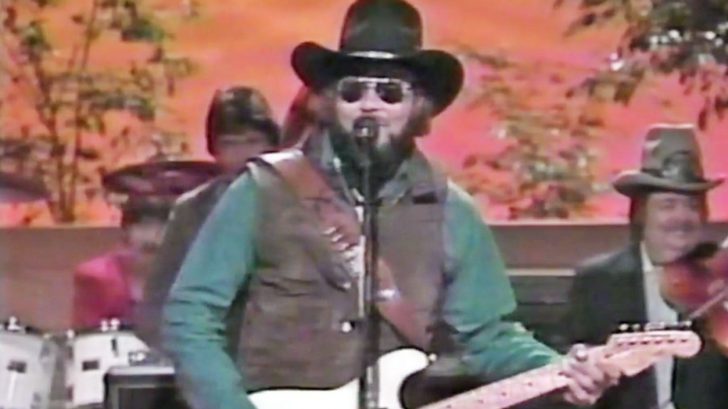 The hit American classic, Hee Haw brought comic and country music to household TV screens across the nation. While the cast kept fans entertained with their hysterical skits and silly behavior, it was always a treat when the show invited special guests. Over its 20-year span on air, country music artists such as Loretta Lynn, Johnny Cash, Garth Brooks, and more made their big Hee Haw debut.

The special guests would often take part in the skits followed by a riveting performance. Some would sing slow hit ballads and others would get the crowd moving from the first note – Hank Williams Jr. was no exception. Hank Jr. had his fair share of screen time often appearing on Hee Haw. From cracking jokes with Roy Clark to hanging with the cast in the cornfields, Bocephus’s funny bone started to show.

When he wasn’t cracking up the viewers, he was putting on some truly unforgettable performances. During Hee Haw’s span of 25 episodes, Hank Williams Jr. performed quite a few times. Just to name a few were, “I’m For Love,” “Ain’t Misbehavin’,” and “Mind Your Own Business.”

One episode, Hank Jr. even got to co-host alongside Roy! After some fun, Hank Jr. took the stage in his signature cowboy hat and sunglasses look, ready to charm the audience. He began to play his dad‘s 1949 song, “Mind Your Own Business.” The song became an instant success after Hank Jr. recorded his own version in 1986, reaching #1 on the country chart for two weeks.

The rock and roll feel on top of his badass attitude made the performance even more exciting.

It’s hard to “Mind Your Own Business” after watching a live performance this good! Check it out below.