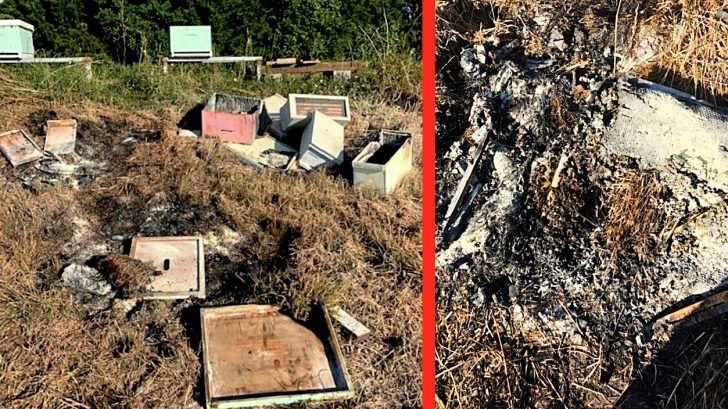 An act of destruction and absolute senselessness has killed more than 500,000 bees that were owned by local bee farmers in Brazoria County, Texas. People have called the criminal actions “beyond comprehension” as this small beekeeping association could be irreparably damaged – not to mention the environmental impact.

Dozens of beehives were both attacked, broken, crushed, and set on fire over the weekend, officials say.

The small, 300-member Brazoria County Beekeepers Association took to social media to share the devastating news and offer a reward for information leading to the arrest and conviction of any person responsible.

The beehives and damage were discovered on Saturday, April 27th, in the early morning hours. Pieces of hives were found strewn about, thrown to the side, broken, beaten, and burned.

“It’s bad enough to think in today’s world this would happen but dumping them over and then setting fire to them is beyond comprehension,” the BCBA said in the Facebook post.

One brood frame from a hive floated in the nearby pond and the poor bees were desperately trying to still care for their eggs.

The Brazoria County Crime Stoppers also shared the images and story – offering a $5,000 reward for information helping to find the person(s) who did this. The Beekeepers Association is offering an additional $1,000.

Their press release stated that a deputy was the first one to spot the crime and he extinguished the flames as quickly as possible, but hundreds of thousands of bees had already been brutally killed by this senseless act.

“In the early morning hours of April 27, 2019, Brazoria County Patrol Deputy T. Liles came upon several burning bee boxes in the 700 block of County Road 194. Deputy Liles quickly extinguished the fire however several thousand dollars of damage and already been done to the boxes.
The Brazoria County Sheriff’s Office urges anyone with any information in reference to the case to contact Brazoria County Crime Stoppers at 1-800-460-2222.”

We would like to thank everyone who is helping with finding the person responsible. In addition to the $5000.00 reward…

Every colony of bees averages around 30,000 bees each and the Beekeepers Association president, Steven Brackman, estimated that more than 20 hives were damaged – which held more than 500,000 bees. All of them either burned to death or were drowned.

Officials have said that suspects are facing arson and felony criminal mischief charges – but they are expecting an uphill battle in finding the person(s) responsible as there were no witnesses to the crime. Hopefully, someone will come forward.

Right now is the time of year that bees are their most active and it’s during a very critical pollination season for the bees and local plants.

“Every colony that we lose is a major catastrophe to the environment,” Brackman added.

We are saddened to hear of this horrible act on these bees and this local community. The Brazoria County Beekeepers Association is seeking donations to help overcome the tragedy and rebuild their lost colonies.

You can make a donation by visiting their Facebook fundraiser – they have already raised thousands of dollars, but need any help they can get.

Watch the full news report below and let us know what you think in the comments.