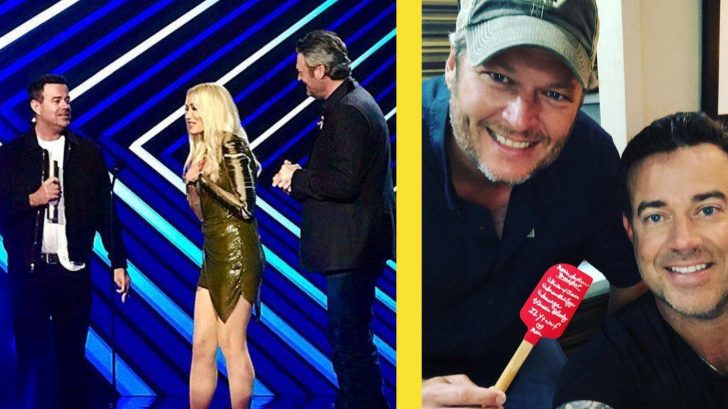 Gwen Stefani and Blake Shelton recently became engaged after first meeting on set of NBC’s The Voice and dating for just over five years…but their love story may never have happened if Gwen had taken some advice given from a fellow castmate.

Carson Daly, who has been a longstanding host on the show, recently recalled a moment of conversation between him and Gwen Stefani along with Blake Shelton prior to them going public with their relationship.

One night at Gwen’s former home in Los Angeles, Daly reveals that he sat them down in the kitchen and warned them about moving forward.

“Years ago, when you started to date Blake,” Daly recalls. “…I sat you and Blake down in the kitchen and I said: ‘You guys, pump the brakes. This is not good. This is not going to work.'”

But what was Daly’s motive for telling them that? They clearly have proven him wrong.

The #NobodyButYou vertical video is OUT NOW on Spotify! Go give it a watch! – Team BS @gwenstefanihttps://t.co/DGWk37fQPK pic.twitter.com/tVOkvjTPx0

According to his interview on Today, he was warning Gwen that she was much too good for Blake!

“And I looked at Gwen and I said: ‘You’re much, much too good for this guy! You’re smart, you’re intelligent, you’re one of my oldest friends……and then there’s Blake.'”

Luckily for the couple, they didn’t heed Daly’s advice and they have endured years of happiness since.

Check out the full clip segment of this interview below.