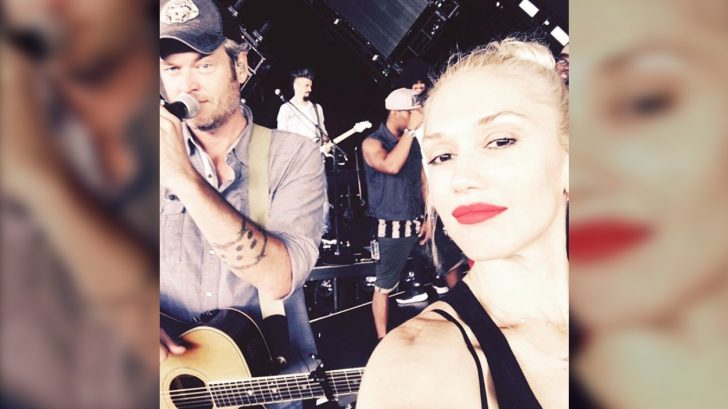 In a 2018 late-night television interview, the 46-year-old music superstar opens up about her then-boyfriend’s addiction – one that is so bad, he even brought it into Thanksgiving dinner.

Gwen Stefani, who released her Christmas duet with Blake Shelton in 2017, followed that up the following year with the matching music video just after Thanksgiving in 2018. It was during her supporting media appearances after that when she revealed Blake’s odd addiction…

The song “You Make It Feel Like Christmas,” was a hit for both Gwen and Blake in the 2017 season and their music video follow up was the perfect thing to keep the success going!

Filled with hysterical scenes of Christmas blunders and situations gone awry, it’s a fun and festive take on the song.

Sitting down with Jimmy Kimmel for an interview, Kimmel decides to ask Gwen about what Blake had prepared for Thanksgiving dinner – something she shared on Instagram in a video clip that ended with her laughing through words, saying “What is wrong with you?”

As it turns out, this conversation ended with her discussing Blake’s addiction – something she says is so bad he wakes up in need of a fix.

So, what is it that has Blake jonesing?

Well, according to Gwen, he’s hooked on Cheetos Puffs. Not the flaming hot kind, but just the standard super cheesy flavor.

Apparently, Blake’s such a cheesy Cheeto fan that someone actually sent him an entire Christmas tree made of Cheetos. Teaming up with Gwen’s son, Blake even decked out their Thanksgiving dinner with a hot Cheeto flavored turkey!

Check out the full, hysterical interview below and let us know if you love Cheetos as much as Blake does!