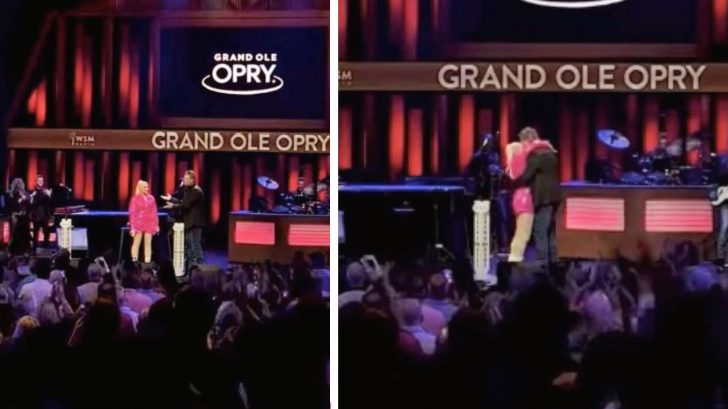 Tilghman and Moten were both members of Team Blake. Hoot was on Team Kelly.

Gwen Stefani, who is Shelton’s wife and a fellow Voice coach, also came onstage to join him for a couple of songs. Stefani previously made her Opry debut in 2020, but did so virtually due to the state of the world at the time. So this performance marked her onstage debut at the Opry.

The Opry crowd gave Stefani a standing ovation as she made her way onstage while singing her and Shelton’s #1 country duet, “Nobody but You.”

Stefani made it clear how honored she was to be singing on the Opry stage. It’s something she never imagined she’d get the chance to do in her life, considering her roots in pop and rock:

“This is one of those things you don’t dream about if you’re me,” she said. “Then all of a sudden, I’m up here with Blake Shelton. It’s a miracle. I’m so grateful. Thank you so much.”

After speaking to the crowd for a while, Shelton and Stefani went on to sing their second #1 country hit, “Happy Anywhere.”

Gwen’s up and sharing. I’m so happy for her. Thank you @blakeshelton @opry 😌
🎥 @gwenstefani instagram’s story pic.twitter.com/SjoVCPBOmu

Stefani ended up earning a second standing ovation before she left the Opry stage. Shelton gushed about her performance that day, saying:

“I am absolutely beside myself right now… Congratulations @gwenstefani on not one but TWO standing ovations for your Grand Ole @Opry stage debut!!!! That was an incredible moment to witness.”

You can see the way the crowd reacted to Stefani’s first Opry stage performance by checking out the video below.

I am absolutely beside myself right now… Congratulations @gwenstefani on not one but TWO standing ovations for your Grand Ole @Opry stage debut!!!! That was an incredible moment to witness. pic.twitter.com/A7ZLmjszrb