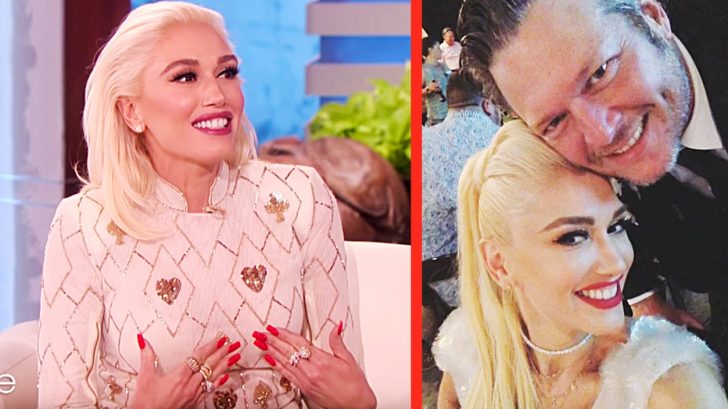 For years now, country superstar Blake Shelton and Gwen Stefani have been dating – but have they taken it to the next level? One half of the celebrity couple has broken her silence during a recent episode of The Ellen DeGeneres Show.

Sitting down with comedian and longtime daytime talk show host, Ellen DeGeneres, Gwen opens up about the rumors that she and Shelton have gotten engaged and already tied the knot!

The funny banter between Gwen and Ellen kicked off with Ellen prodding her, “So, Blake told me y’all are engaged now.”

The look on Gwen’s face said everything – and her response was even more potent!

Their Most Recent Project

Just in time for the 2018 holiday season, Gwen and Blake teamed up for a music video set to the tune of their 2017 holiday duet “You Make It Feel Like Christmas.”

The song, which was a big part of her holiday album’s success last year, is an upbeat festive hit that fans have been raving about. To top the success of the song, they whipped up a hysterical and amusing video that has scored millions of views already!

Gwen gushed over her beloved boyfriend and his starring role, admitting that he was hesitant to shoot the video at first, but she cracked him and ended up getting him to agree to shoot the cheesy love story video she had hoped for!

“That was Blake,” Ellen said during a giveaway on the show. “He said you’re engaged.”

The family-favorite comedian and Gwen Stefani took over her show for a bit of fun with the audience and gave away brand new smartphones and other popular prizes as part of her 12 Days of Giveaways.

They didn’t stop there though, they also sat down and chatted about what was new in Gwen’s life – and if she had already tied the knot with Blake – something Ellen seems to always find a way to ask!

According to Hollywood Life who had early access to the airing, Gwen’s response to Ellen was absolutely fantastic – and it set the record straight on these pesky marriage rumors.

As we know, both Gwen and Blake had gone through some tough divorces in the last 5 years and it was their similar situations that brought them closer together.

“No, he did not! No — we’re not!” Gwen giggled. “What are you talking about?! We’re not engaged, we’re not married. He’s my boyfriend still.” Ellen kept up the line of questioning asking, “When will you get married?” To which Gwen exclaimed, “I do not know!”

“I do like talking about him,” Gwen then confessed. “He’s awesome. And we got to do a video together! See how I did that? Changed it to something that would benefit me?”

Of course, the rumors of their marriage and engagement have been flying around for some time, but it remains to be seen when or if these two will officially tie the knot. Ellen had previously told Gwen that she believes they definitely should get married – and in this new interview, she even suggests that Gwen should propose to Blake!

What do you think of Gwen’s statements? Do you think they should get married? Let us know in the comments!