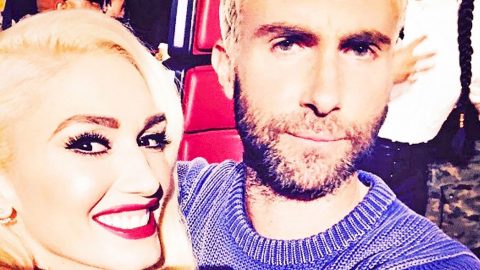 On May 24, 2019 Voice fans were shocked when it was announced that Adam Levine was leaving the show after serving as a coach for 16 seasons. The news was made all the more shocking since it was previously announced that Levine was planning to return for Season 17.

The news of Levine’s departure was initially announced by Voice host Carson Daly on the TODAY Show. Levine later followed up with an announcement of his own, thanking all involved in the show for making it such an incredible experience.

About 8 years ago, Mark Burnett convinced us to sign up for this show where you sit in a big red chair with your back…

Because Levine’s decision to leave the show was so sudden, The Voice couldn’t drag its feet in finding a replacement. Since the blind auditions film months before they air for each season, they needed a new coach right away.

So the show called on someone who had served as a coach three times before…Gwen Stefani. The pop superstar actually fell in love with her boyfriend Blake Shelton while working on the show.

After the news broke about Levine’s departure, Shelton and the other Season 16 coaches responded on social media.

Having a hard time wrapping my head around @adamlevine not being at @NBCTheVoice anymore. After 16 seasons that changed both of ours lives. I only found out about this yesterday and it hasn’t set in on me yet. Gonna miss working with that idiot.

Found out last night about @adamlevine leaving The Voice & while I get that he’s been doing the show 4 a while & wants to step away, it will be weird showing up 4 work & he’s not there 👀 To start an amazing show from the ground up is a big deal!

But the one person who remained noticeably silent was Stefani.

Finally, for the first time since Levine’s announcement, she opened up about replacing him on the show and revealed just how sudden his decision to leave truly was.

Speaking on The Talk in June 2019, Stefani said she purposefully kept from posting about her return to The Voice. “I haven’t posted, I haven’t talked about it yet, because it was such a shock,” she said.

She said that Levine’s decision to leave was made “really quick.” In fact, she said that she had just talked to him the night before she found out he was leaving the show, and he didn’t say anything about his decision.

Just as Levine’s departure was quick, so was the choice to have Stefani return to the show in his place. As she said, she found her way back on the show after getting just a single text and then a call from her manager.

You can listen to Stefani talk more about Levine’s departure from The Voice and how she felt about it below. It’s clear that she was just as shocked by the news as everyone else!

After coaching as Levine’s replacement during Season 17, Stefani took Season 18 off before it was announced she would return yet again to coach Season 19 in the Fall of 2020!