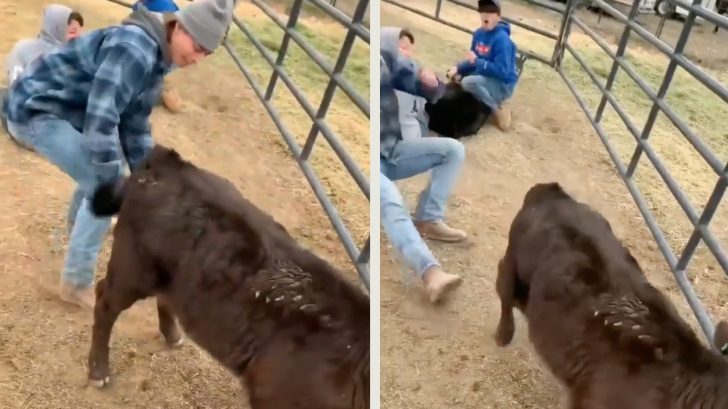 An Instagram channel called Nature’s Brutal shares some of the most brutal photos and videos of animals doing their thing and recently shared a video of a man getting kicked in the face by a small calf.

The incident occurred inside a fenced-in dirt patch area where a dozen other people were standing and sitting on the ground petting and loving on calves.

One of the guys in the group got the stupid idea to bend down and grab the back of a calf’s leg. The cow’s tail was swinging back and forth and when the guy tried to sneak up on the calf and grab its leg, the cow reacted and kicked the boy right in the jaw.

Before the guy could realize what happened, he was on his back in shock with a mouth full of blood while the young cow was running around the fenced-in area. The calf kicked the hat clean off the boy’s head and had him seeing stars.

“Calf kicks man in the chin,” Nature’s Brutal wrote on Instagram. “Was this deserved?”

Manly people in the comments of the post felt sorry for the guy, though most agreed that the calf was in the right to defend itself from the mischief maker’s.

“I bet he won’t try that again!” one user wrote.

“Now what have we learned,” another said with a laugh emoji.

Watch Footage Of The Cow Kicking The Guy Below