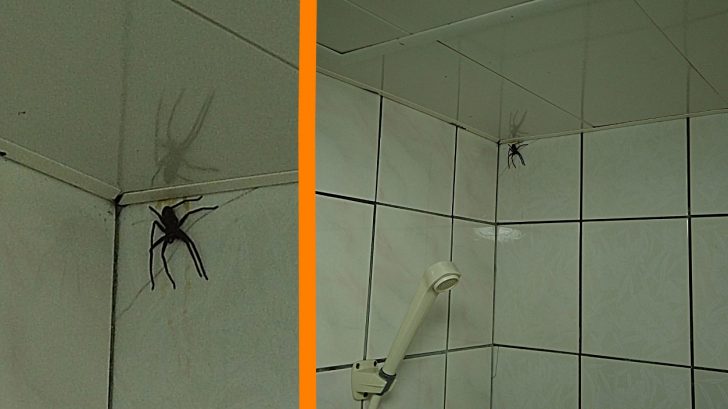 A Frenchman named, Kayden Caffin, went to take a shower in Taiwan when he noticed a venomous huntsman spider in the bathroom watching him.

Kayden said he was already naked when he stepped into the shower to turn the water on and as he did, he looked up to see the huntsman perched in the ceiling corner. It was right above the showerhead and it could have easily jumped on him if it wanted to.

“The spiders are very mobile because the heat makes them more alive,” Kayden wrote on Facebook. “I was naked and I was going to turn on the tap to take my shower … I assure you that I still have a little trouble with this kind of surprise.”

He quickly got out of the shower to secure his own safety and then took a picture of it. Kayden later shared the photo on Facebook to show the public just how big it was.

Kayden wrote, “For the French who are afraid of black spiders, I assure you, after seeing this kind of creature traveling on the wall, I’m going to have a hard time taking a shower, even after killing it (yes it’s dead)!

Huntsman spiders get their name from their mode of hunting and can move very fast. Their legs can span up to 5.9 inches and just one bite from this bad boy can result in pain, swelling, nausea, headache, vomiting, irregular pulse rate, and heart palpitations. It’s just best to stay away from them.

??I was naked and I was going to turn on the tap to take my shower … I assure you that I still have a little trouble…