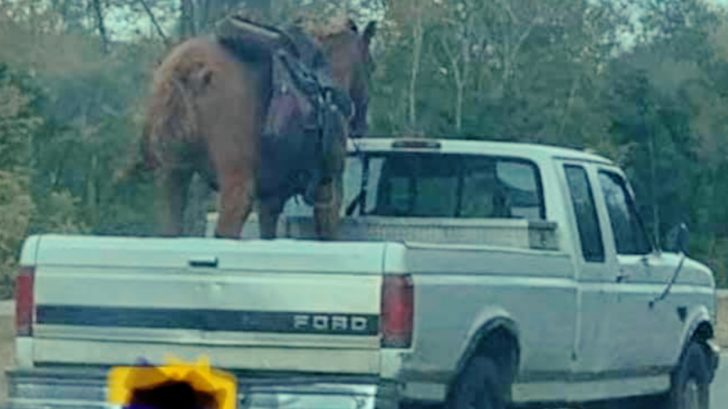 Nick Beres from News Channel 5 shared a shocking photo on Facebook of a horse standing in the back of a pick-up truck as it was flying down the interstate going 45mph.

“One of my Facebook followers sent me this photo taken today around 3 p-m on I-40 eastbound near Waverly, Tennessee,” Nick wrote on Facebook.

It apparently happened in Waverly, Tennessee on I-40, and the United States Department of Agriculture (USDA) is currently investigating the matter. Officials were able to trace and find the truck via its license plate but authorities were not able to locate the driver of the vehicle.

Tennessee State Veterinarian and Assistant Commissioner for Animal Health, Dr. Samantha Beaty, said “If an accident were to occur, failing to secure an animal properly could result in injury to that animal and other travelers.”

The driver later reached out to Nick and told him that he loves his horse and would never put her in danger. He added that he was on his way to sell the horse in Tennessee, and he did, just before driving back to Mississippi.

“Authorities tell me this is wrong and dangerous. I do not know if there is a specific law prohibiting this on the books. But, I’m told the charges could be anything from reckless driving to animal cruelty,” Nick said.

The guy will most likely be found and have to answer for his reckless decision. Let this be a lesson to us all and never put a horse in the back of a pick-up truck.

ABSOLUTELY UNBELIEVABLE.
You have to see this to believe it.
I can tell you even law enforcement is shocked.
…