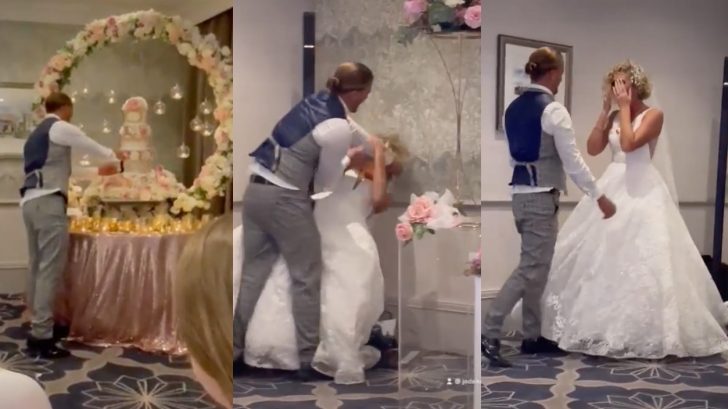 A video has been going viral on TikTok that has a lot of people conflicted over a man smashing his wife in the face with a wedding cake on their wedding day.

The video showed the newlyweds enjoying their big day as the husband walks over to their beautiful wedding cake and cuts a piece and starts carrying it over to his lovely wife.

She stands there in her perfectly white wedding dress and looks over to see him headed her way knowing what was coming and starts to run away. However, there was nowhere for her to go and ended up backing herself into a corner.

He tried to smear cake on her face and she tried to step away to dodge the smear but tripped over some audio equipment in the corner and went falling to the floor.

Her husband then picked her up off the ground as they both laughed about the ridiculous moment.

The wife ended up posting the video to TikTok and said in his defense, she smashed him with a cake first and he was just getting her back.

She, Jade Kennedy, wrote, “It’s official we’re mr and mrs price [sic] he got me back for doing it to him good and propa love my ars–hole of a husband.”

The post got a lot of people getting upset over the video so Jade ended up turning off the comments. However, another TikTok user reposted the video and people commented on that one giving their full thoughts on the incident.

“Too aggressive, my dad would have knocked him out,” another said.

“It [sic] a very special day for a woman. She gets her hair all pretty, makeup done flawlessly, looking like a princess.. only to have it ruined like that,” another commenter said.

“Nahhhhh that would of been the shortest marriage ever,” another woman wrote.

Watch The Viral Wedding Video Below