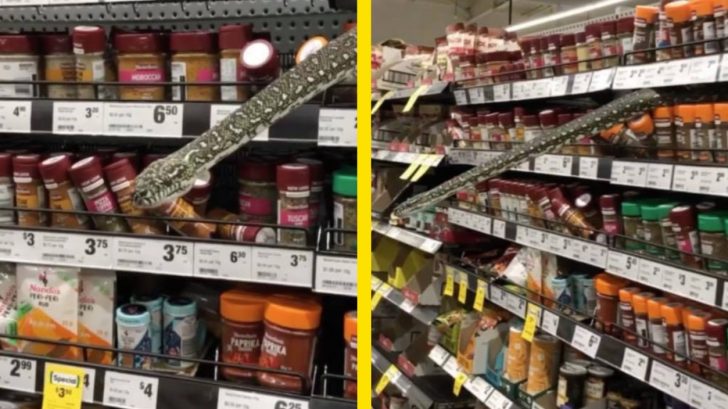 Helaina Alati from Sydney, Australia was walking through her local supermarket when she spotted a fairly large python poking its head out from one of the aisles.

“Pythons are non-venomous but can inflict a painful bite. Teeth can break off and remain embedded in the victim,” the Australian Museum said on its website.

Helaina was there shopping for supper on Monday night and browsing through the spices aisle when she turned her head and the snake was “just 20cm from my face,” she told The Guardian.

The diamond python “just wanted to say hello,” Helaina explained. The snake was behind the spices protruding about a foot and a half out from the shelf and she speculated, “Dozens of people must have walked past it.”

The Australian Museum said, “The diamond python is not as widespread in Sydney as it once was and, although it is not considered endangered, it is under pressure from habitat destruction.”

One of the supermarket’s employees was notified of the reptile and “reacted quickly and calmly” to block off the area to secure the safety of the customers.

“It’s lucky I was the one it popped out to,” Helaina said. “Most people would have freaked out.”

Helaina was previously a volunteer snake catcher and lived close to the store, so she went home and grabbed the necessary equipment to safely remove the non-venomous snake.

“It was chill, and not aggressive at all,” Helaina said. “It wasn’t in a defensive position. It slithered right into the bag. I’m used to seeing snakes in weird places but I wouldn’t expect it to be in a Woolworths.”

Footage Of The Snake Below