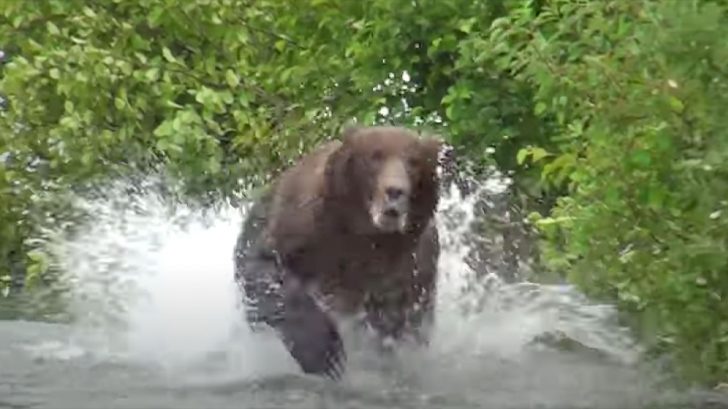 A group of photographers had a harrowing experience after they were charged by a grizzly bear at Alaska’s Katmai National Park.

The video footage shows a large male grizzly calmly wading through the water before it decides to charge at a group of photographers who were getting close to his personal space.

The whole encounter demonstrated just how fast these grizzly’s can run and how important it is to respect the wildlife.

The instinct to run for your life may seem like common sense if a grizzly approaches you, but such action is highly unlikely to end well. As seen in this video, the grizzly bear can run much faster than your average human and has an easier time navigating outdoor terrain.

While in bear country, be aware that you may encounter a bear at any time so it is a good idea to learn what to do just in case something happens. Most experts recommend that in the event you encounter a grizzly, do not run – even if it charges you. Avoid direct eye contact and walk away slowly, if the bear is not approaching. If the animal makes contact, curl up into a ball on your side, or lie flat on your stomach. Try not to panic; remain as quiet as possible until the attack ends.

Watch the encounter in the video below.