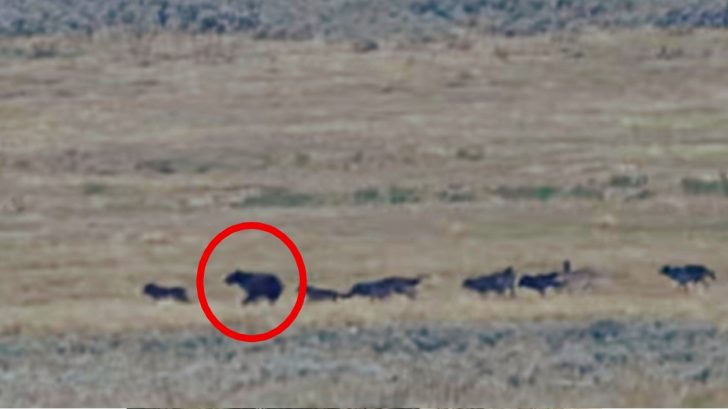 Some hair-raising footage was captured between a pack of wolves and a hungry grizzly bear in Yellowstone National Park. The battle went down in September 2020 and At Home In Wild Spaces shared the video of it on YouTube.

“After twenty-five years since wolves were reintroduced to Yellowstone National Park, we have the opportunity to view these apex predators again competing, but more importantly, we have the opportunity to learn about the natural world and how charismatic animals like bears and wolves affect their environment,” At Home In Wild Spaces wrote on YouTube.

As mighty as they may appear gathered around their freshly killed bison, from out of nowhere, a massive grizzly bear comes running straight towards them and challenges the pack for the carcass.

The bear must have smelled it from miles away and doesn’t hesitate to run through the wolves to get to the kill. The wolves tried their best to growl, bark, and bite at the bear but they could not stop it from taking their meal. Watch the incident in the video below.

Grizzly vs. 20 Wolves Video Below