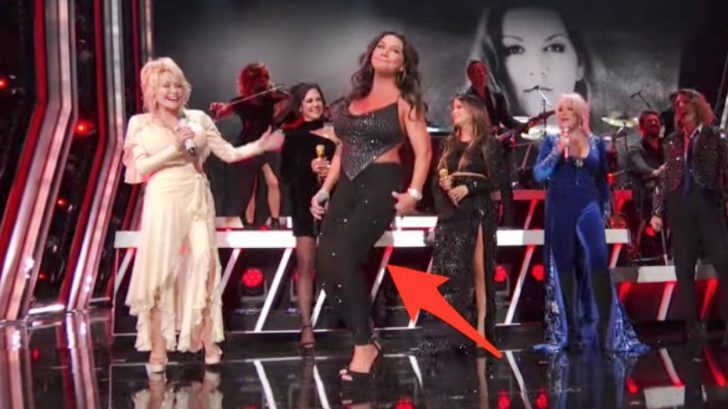 All anyone can talk about is the star-studded opening number from November 13, 2019’s 53rd Annual CMA Awards.

Hosts Reba McEntire, Carrie Underwood and Dolly Parton kicked things off with a performance of “Those Memories of You,” a song first recorded by Dolly Parton, Linda Ronstadt, and Emmylou Harris in 1987.

Tanya Tucker then performed “Delta Dawn,” the song that made her famous at age 13 in 1972. Gretchen Wilson joined the women on stage to sing her Grammy Award-winning song “Redneck Woman.”

Crystal Gayle, country legend and sister of Loretta Lynn, took the stage to perform “Don’t It Make My Brown Eyes Blue” from 1977. Terri Clark and Sara Evans took turns singing their career-making hits “Better Things To Do” and “Born To Fly” respectively.

The collaboration concluded with Martina McBride performing her signature song “Independence Day” with the help of her fellow female artists.

Not only did every perform flawlessly, but they were also all dressed to nines as well! During rehearsals, Gretchen Wilson was still looking for the perfect pair of pants to match her top she had picked out.

Dolly Parton was wearing black pants with rhinestones on them, and Gretchen mentioned how she loved them and wanted to wear something similar for the big opening number.

I mean…COME ON! ??? Join Carrie Underwood with special guest hosts Reba McEntire and Dolly Parton as they hit the stage to host Country Music's Biggest Night Wednesday at 8|7c on ABC. #CMAawards

Most people would recommend a store or a stylist, but according to The Boot, Dolly offered her the actual pants she was wearing! You can see from the photo above – and below – that Gretchen did, in fact, wear Dolly Parton’s pants during the number!

Now that’s a story we’ll always remember. and we’re sure Gretchen will too!

Watch clips of the performance below.