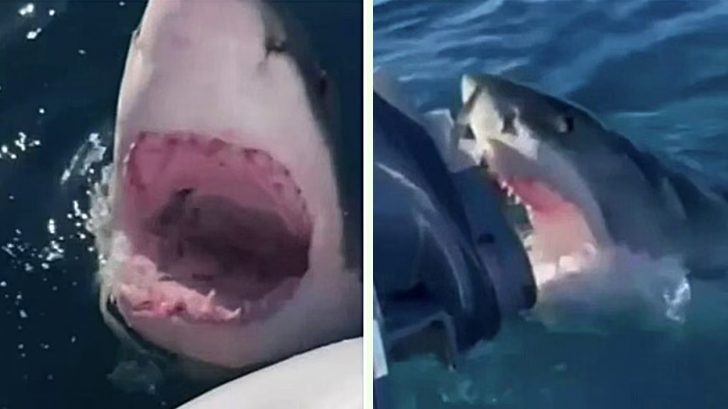 David Tuckfield was enjoying a fishing trip on his boat on Good Friday (April 15) with his wife Kunya, and their 14-year-old son Shelby Tuckfield when a great white shark attacked the back of their boat.

The family said the shark stalked them for about an hour trying to steal the fish they were catching and reeling onto the boat before it turned towards the motor and started chomping on it.

The encounter took place off the coast of Mandurah, which is south of Perth, Australia. The estimated 12ft great white was caught on camera as the family filmed it baring its teeth down on the back of the boat.

Terrified Kunya can be heard in the video screaming as the huge marine predator thrashed around in the water beside the boat. At one point, the shark even lunged out of the water taking a good look at the boat’s occupants.

Kunya said in the video, “Oh! He is trying to eat the motor!”

She later tells a 9News reporter, “My goosebumps! I never saw a shark that large before.”

After about an hour of chasing the boat around with continuous failed attempts at stealing the angler’s fish, the shark finally gave up and sank back down into the deep blue sea.

David said he has never seen a shark that big in all of his days of fishing, much less one that close to his boat. Overall, they went home with a family trip they’ll be talking about for years!