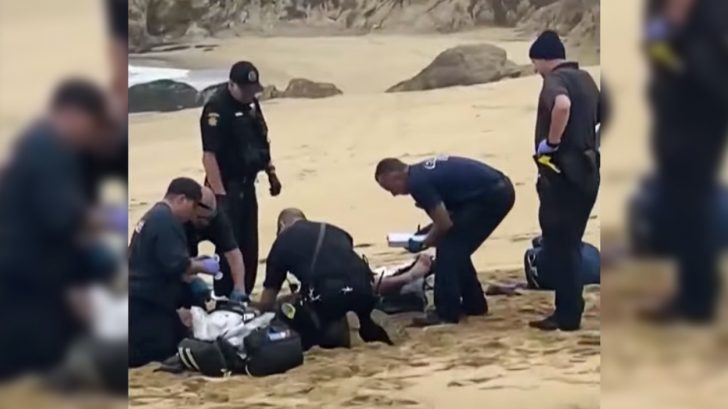 San Mateo County shared a statement over the weekend that a 39-year-old man was bitten by a 6-8ft great white shark as he was swimming off the coast of California.

Authorities said it happened at Grey Whale Cove State Beach around 9:15am while the man was bodyboarding and skin diving. As he was on the board, he was bitten in the right leg and was somehow able to swim back to shore where he received help.

Firefighters and paramedics said he lost a pint of blood so they placed a tourniquet on his leg to stop the bleeding and used advanced life support equipment to keep him stable. A rescue helicopter wasn’t able to get to the area due to the clouds so he was transferred to the hospital by ambulance.

INCIDENT UPDATE: Upon arrival at Gray Whale Cove firefighters/paramedics found a male on the beach with a confirmed bite to his body. Patient was treated with advanced life support measures and transported to a local trauma center in serious condition. pic.twitter.com/z3dcy9gTR6

The gentleman was taken to Stanford Trauma Center with serious but not non-life-threatening injuries and later transferred to San Francisco General Hospital. After being fully treated there, he was released from the hospital and went home that same evening.

“The surfer got a look at the shark, that’s how he was able to say it was a young great white,” San Mateo County Fire District Battalion Chief Brian Ham told San Francisco ABC station KGO.

Officials shut down the beach and launched an investigation into the matter.

At 9:15am, a 35-year-old man was swimming off of Grey Whale Cove State Beach when he was bitten in the right leg by a 6-8 ft. great white shark. The male was able to swim to shore and medical aid was summoned. The male was transported to Stanford.⚠️The beach is now closed.

A great white shark is on average 13 to 16 feet in length. However, some of them can grow to be as big as 20 feet long. Last year there were 33 unprovoked shark attacks on people in the United States where three of them were fatal.