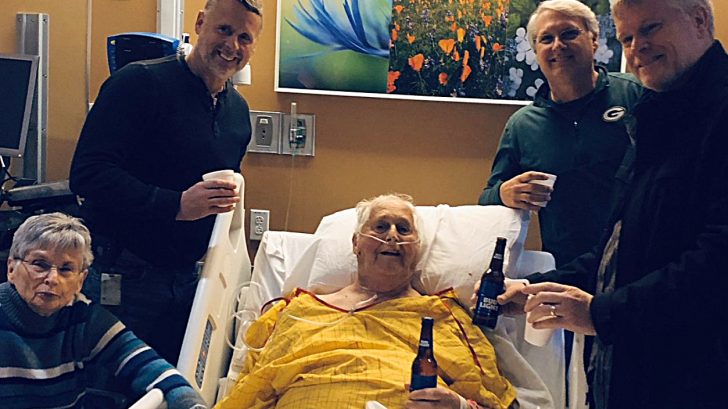 Having Last Beer With Grandpa

Adam Schemm, from Wisconsin, posted a picture to his Twitter account on November 20th showing the men in his family having one last beer with his grandpa before passed away.

My grandfather passed away today.

Last night all he wanted to do was to have one last beer with his sons. pic.twitter.com/6FnCGtG9zW

The picture taken by Adam shows his grandpa’s hospital bed with his father and uncles there answering their dad’s dying wish to drink a beer with him. The men can be seen standing around the hospital bed, each holding a bottle or cup of beer as they smiled for the picture.

“My grandfather passed away today. Last night all he wanted to do was to have one last beer with his sons,” Adam wrote.

Adam’s heartfelt post hit the emotions of many and inspired the Twitter community to flood his post with thousands of comments. People shared similar pictures of them having “one last” drink with their loved one before passing.

My grandmom did the same thing but with shots of Bailey’s ?? pic.twitter.com/LjSg757YIn

Did the same thing with my Dad in May. Cold beer and a Yankee game. My condolences pic.twitter.com/aNSULc7AT8

I don’t know you… but I felt this. Days before my grandpa passed he let my dad and I know he wanted a cigar and a beer. We made it happen. I’m so sorry for your loss. Your grandpas smile is one for the books! pic.twitter.com/HDv3y2kLeA

Since the day he posted the picture, Adam’s post has received over 30 thousand retweets, 334,000 likes and thousands of comments. Most people were expressing their condolences for Adam and his situation.

Nothing is worse than losing a loved one, but then again nothing is better to that loved one than to be surrounded by all the people they love before crossing over. Sorry for your loss Adam, may we all get to be with our loved ones too when it’s our time.