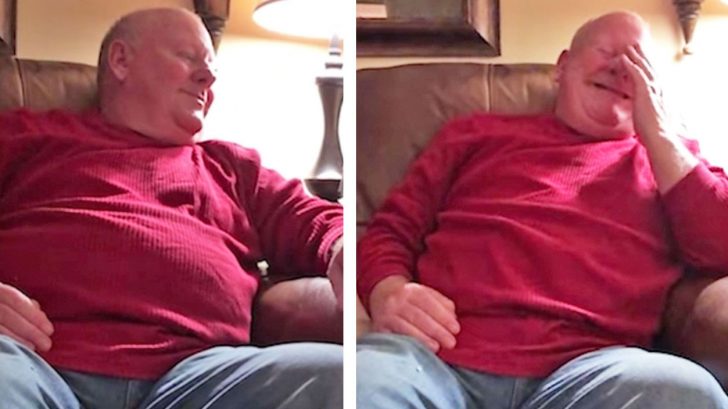 It’s not every day you catch special moments like these on camera. One grandfather got the beautiful opportunity to hear one of his very own songs recorded by a loved one. His granddaughter surprised him with a recording of her singing a song he wrote back in the 1980s. The emotional moment left the grandfather in tears.

The History Behind The Song

During Christmas 2018, Karli Willett thought of the best present for her grandpa, Mike Brook. Karli, who is an aspiring singer, found the lyrics to one of her grandfather’s songs that he wrote in the 80s. Karli had first heard the song when her grandpa would sing it to her mother, Chera as a child. Karli then decided she was going to do her own recording for her grandpa.

Grandpa Mike wrote this song during a rough patch in his life. While Mike dreamt of joining the army when he was 21, his dreams were quickly shot down. Unfortunately, due to his football injuries and loss of hearing in one ear, Mike wasn’t fit to serve his country.

Nonetheless, he heard one soldier’s story about his time in Vietnam and was inspired to write. He would often sing the song to his children which got passed down through generations.

When Karli presented the recorded song to her grandfather, he had no idea it was his own. As the music began, Mike sat there already with a smile on his face. It was only the first verse into the song that Mike knew exactly what he was now hearing. He began to cry, unable to control his emotions.

The heartfelt tune tells the sad reality of going off to war.

“You won’t find his name in the pages of history, but it’s there on the Washington wall. Sometimes when he looks around, Timmy wonders, if he ever got back at all.”

As the song comes to a close, grandpa Mike claps his hands and cries as he hugs his granddaughters.

When asked if he ever expected that, he wiped his tears and exclaimed, “No…no.”

Watch this sweet moment unfold between a grandfather and his granddaughter below.

This is the emotional moment a grandpa hears the song he wrote in the 1980s – after his granddaughter found the lyrics and recorded it herself ?❤