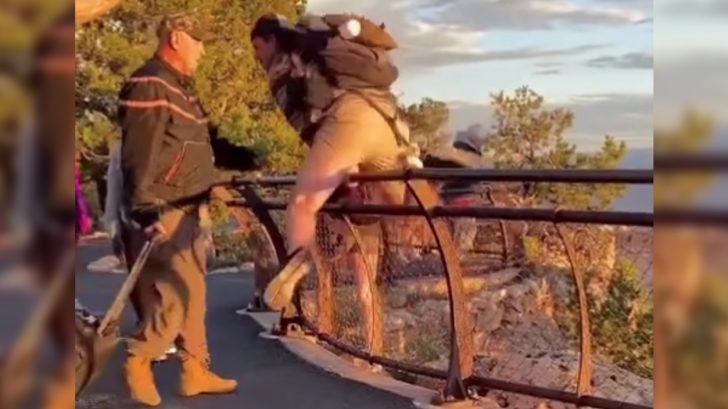 Popular Instagram page Tourons Of Yellowstone posted a video this week (mid-Sept 2022) showing a man getting absolutely furious at a younger man for going over the dangerous railing at the Grand Canyon National Park.

Tourons Of Yellowstone wrote on Instagram, “Some tourons at the Grand Canyon. A guy and a girl jumped over the railing at the GrandCanyon and a local got really mad about it, then a lady came over to break it up.”

Visitors at the Grand Canyon were checking out the scenic views when one of them with a camera noticed a couple climbing over the railing of what appeared to be a very dangerous area of the park.

Before the guy could get over to the safe side of the fence, he was approached by a retired military man who was very upset at the couple for blatantly disobeying the park’s safety rules.

The couple was not only putting not only their own lives in danger but other people’s lives in danger as well because if they fell, rescue workers would also have to risk their lives trying to retrieve the bodies.

Back to the story, as soon as the man jumped over the fence the military veteran says in the video, “Why would you do that? Why are you such a fool?” he asked, nose to nose with the rail jumper. “You’re under arrest.”

The delinquent Grand Canyon visitor then responded,“Under arrest? Who the f–k are you?” he answered back laughing.

The two men continued to argue back and forth at each and they looked like they were about to start getting physical with one another until a lady stepped in.

She wasn’t just any lady, however, she was also a military veteran and went straight into the situation to help defuse it before it got physical.

“Hey, you guys, let’s knock it off,” she said. “We’re just trying to enjoy the scenery, okay? And have a good day. I’m military too, let’s just back off.”

Watch The Rest Of The Altercation In The Video Below