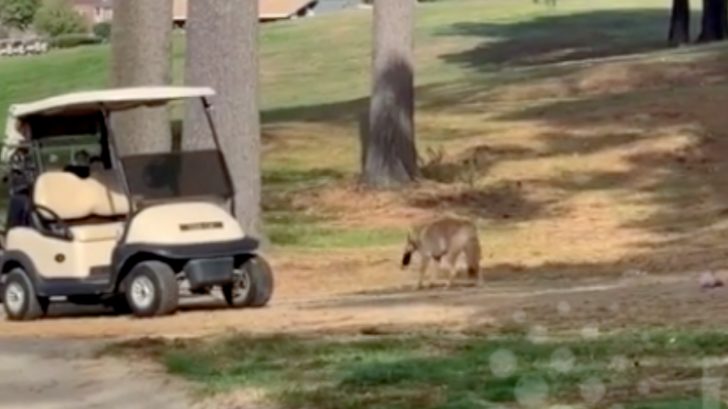 Chris was with a few of his buddies enjoying a fun game of golf when they experienced an event that probably still has them laughing until this day.

The guys were golfing on Cambridge Street in Suffolk County, Boston, Massachusetts when they spotted a wild coyote getting into mischief near their golf cart. Upon further inspection, it appeared the animal was sniffing around in search of food.

As the men stood by and watched, the coyote rummaged through their cart and grabbed someone’s phone. It then pulled the phone out onto the ground and started sniffing it.

“Oh he did take… what is that?” one of the men asked in the Newsflare video. “Oh no, he’s going to run away with it. Wait, you gotta be careful.”

A guy began to walk towards the coyote, he hoped he could scare it into dropping the phone. However, the coyote put the phone in its mouth and took off running about 100 feet away. It dropped the phone and starts sniffing it again.

At this point, more guys proceeded to run after the coyote but it was not going to let them catch it. The coyote picked the phone back up and runs across the golf course. The video cut off and it’s not clear if they ever got that phone back.

Footage of coyote stealing the phone can be watched below.