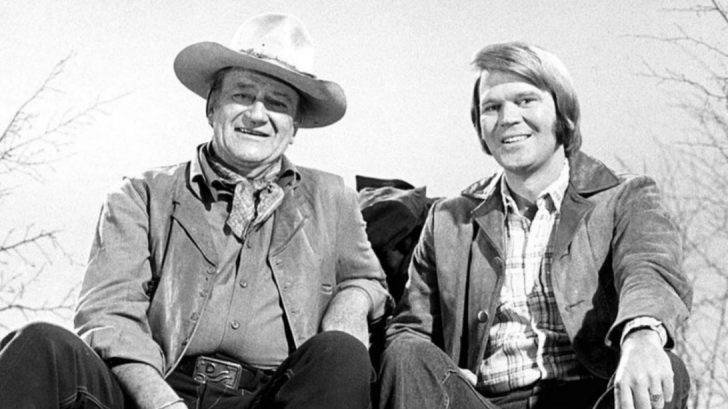 John Wayne is considered to be one of the most iconic actors to ever grace the silver screen. With more than 170 films to his credit over the course of his 50-year film career, it may be surprising to some that the Duke only won one Academy Award.

“Fear is just one of the many words I don't know the meaning of.” #JohnWayneValues

Like Father, like son! Duke & Ethan on the set of True Grit ?? What movie set would you visit John Wayne on? pic.twitter.com/vAT5TgZ4aZ

Made 40 years after his big screen debut in the 1929 musical comedy Words and Music, True Grit featured Wayne as one-eyed U.S. Marshal Rooster Cogburn. Country crooner Glen Campbell was at the height of his musical career when he made his film debut alongside John Wayne in True Grit. In a 2011 interview Campbell recalled working with John Wayne saying, “He was so much like my dad. He was a very nice guy.”

Campbell admitted that he was a better singer and guitar player than actor and took the role in True Grit because he was a long-time fan of John Wayne. But, he was quick to jokingly point out that he did a “good deed” in True Grit.

“I made John Wayne look so good in a movie,” Campbell said, “that he won his only Oscar.”

“Wow, if I’d have known that, I’d have put that patch on thirty-five years earlier,” Wayne told the crowd during his acceptance speech.