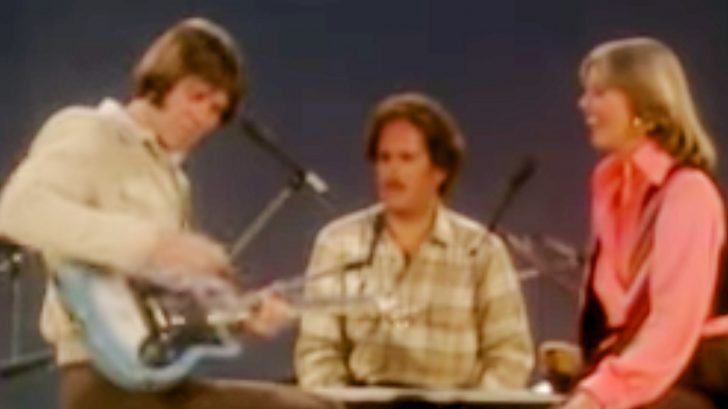 Some of the biggest hitmakers in the 1970s brought their incredible talent to the same stage in a rare performance that many folks probably never got a chance to see!

Both pop group Captain & Tennille and country sensation Glen Campbell had their own namesake variety shows in the 60s and 70s, it wasn’t until a 1979 episode of The Captain and Tennille TV Show that all three musicians got together on the same stage.

Daryl Dragon was a classically trained pianist who performed with the Beach Boys before he and Toni Tennille found success as a duo. He even recommended Tennille to the Beach Boys when they needed an additional keyboardist. She toured with them for a year and was known thereafter as The Beach Boys’ one and only “Beach Girl.”

Along with both Dragon and Tennille, Campbell was also a touring member of The Beach Boys and filled in for Brian Wilson playing both bass guitar and delivering stunning falsetto harmonies to the group’s famous hits.

Decades later, these three sat upon a stage and each took part in singing a country song written by Tennille that they had released on their very first album, Love Will Keep Us Together.

Sadly, on January 2nd, 2019, Daryl Dragon passed away from renal failure at the age of 79 – with Tennille by his side.

Music trivia….Apr. 19, 1975….Captain and Tennille score their first hit with, "Love Will Keep Us Together".

In this one-of-a-kind clip, the three talented artists sing a song titled “Feel Like a Man” with Alabama-born Tennille taking lead vocals after introducing the song to the audience.

“This is the first time that we have ever played together,” Tennille said with her notable Southern accent. “And this is kind of a country song that I wrote called ‘Feel Like a Man.’ Now, Glen’s gonna play electric guitar and Daryl’s gonna play the clavinet – which is kind of an interesting keyboard.”

Without pause, they jumped into this truly magical collaboration that the world witnessed for a brief time way back in 1979.

We absolutely love this piece of musical history that showcases the talents of these wonderful performers – two of which are no longer with us. What a great way to remember them!

Watch this stunning performance below and let us know what you think in the comments!