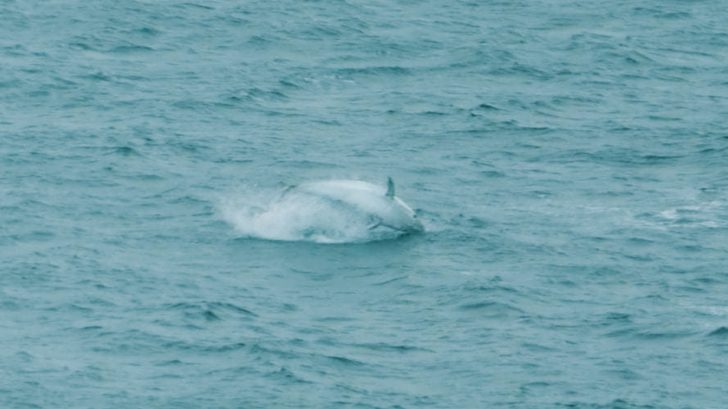 37-year-old Pater Nason was volunteering at St. Ive’s National Coastwatch Institution off the coast of Cornwall in southwest England when he filmed some massive tuna leaping out of the water.

Animal experts say that it was the endangered Atlantic Bluefin Tuna that had been gone from the area for more than 100 years. However, in the past decade, the fish has been making a comeback and are now regularly spotted around UK’s coastal regions in the autumn and summer.

They only eat other fish and are not dangerous but you will be in big trouble if you are caught reeling one in and not releasing it back into the water. The fish is highly illegal to catch in the UK and those caught breaking the law will be criminally charged.

They are known as the world’s most expensive fish and it can be very tempting for fishermen to want to keep one to try and sell on the black market. Some Atlantic Bluefin Tuna have been known to sell for millions of dollars per fish.

Marine biologists say they can grow up to nine feet long and weigh as much as 550 pounds. They are powerfully built to travel long distances across the open ocean and can dash at torpedo-like speed through the water when hunting prey or scared swimming away.

Pater Nason said they spotted the fish on October 23, 2021. The last time wildlife officials said they were confirmed spotted was two months ago off the coast of Penzance. It’s great to see them back in the waters! Take a look at the video below and watch them fly through the air.