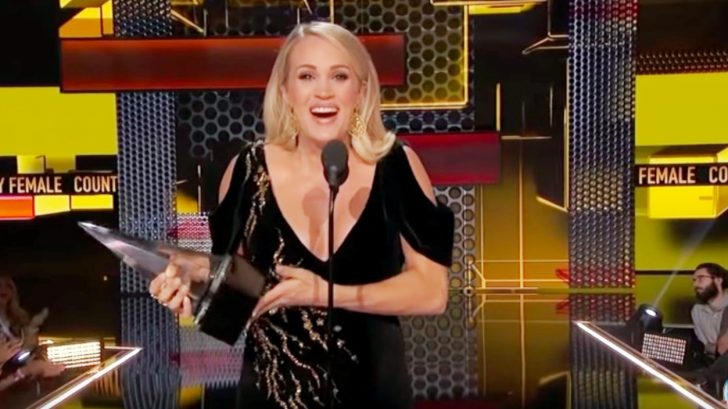 The past few months have been quite the emotional roller coaster ride for Carrie Underwood. On the positive side of the spectrum, she revealed she’s expecting her second child, released a new album, and earned a star on the Hollywood Walk of Fame.

But the past few months haven’t been full of happy moments. Underwood has been forced to deal with endless rumors and criticism surrounding her November 2017 fall and the injuries she sustained. On top of that, she dealt with some serious backlash after making comments in a Redbook interview that she didn’t know if her dreams of having a large family would ever come true because of her age.

Later, Underwood made an emotional confession about why she once believed she was never going to have another child.

Through it all, Underwood’s fans have served as strong sources of support. They helped propel her album, Cry Pretty, to the top of the Billboard albums chart, and voted for her to win Female Video of the Year at the CMT Music Awards.

Once again, the fans pulled through and rewarded Underwood with another major honor during the American Music Awards on Tuesday (October 9).

Marking her 13th win at the fan-voted awards, Underwood was presented with the trophy for Favorite Female Artist in the country genre. Other nominees included Maren Morris and Kelsea Ballerni.

Overcome with joy, Underwood took to the stage to accept the award, first thanking God in her speech. Then, she devoted the rest of her time to thanking her team and her fans:

“Thank you so much,” she said to the fans who made that moment possible for her. “You have shown so much love and support for me for the past few months of my life, and well, my whole career, honestly.”

Later, Underwood took to social media to write even more thank yous, explaining that she didn’t even say half of what she should have.

Such a wonderful night! I am honored and humbled by the love I received from you all tonight. I made absolutely no sense in my speech and didn’t say half of what I should’ve, but I want you all to know that your support means everything to me! Also, I am beyond honored to be in the company of such talented ladies like @marenmorris and @kelseaballerini to represent the women of Country Music tonight. That said, I’m off to peel this dress off and cuddle up to my little man! I shall go to bed with a full and happy heart! ❤️?❤️?❤️ And, of course, thank you #AMAs for having me and for letting the fans call the shots!

It’s clear that Underwood is sincerely grateful not just for her new AMA, but for everything her fans have helped her accomplish over the years. You can watch her full acceptance speech by tuning in to the video below.

Congratulations to Underwood on this remarkable accomplishment!