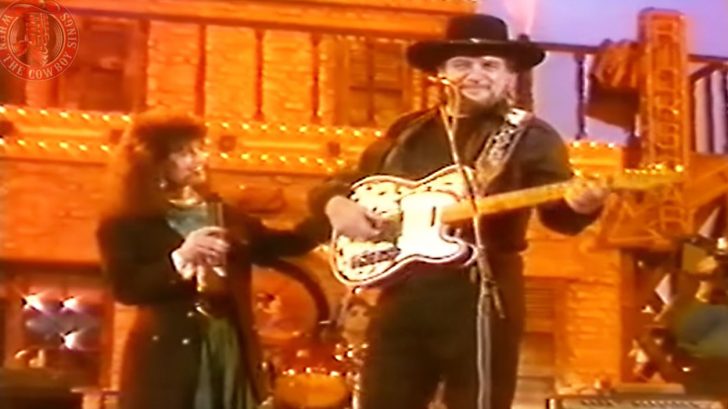 The famous tune “It Wasn’t God Who Made Honky Tonk Angels” by Kitty Wells has been covered several times in the country world. From Patsy Cline’s rendition to Dolly Parton, Loretta Lynn, and Tammy Wynette’s trio rendition, country stars have had their fun with the song.

One country music power couple decided to follow the trend.

Waylon Jennings and his wife, Jessi Colter tore up the stage with their live co-ed version of the song making the crowd go wild. The performance started off with Jennings covering “Wild Side Of Life” by Hank Thompson. His twangy vocals alongside the instrumentals reminded the crowd how talented this country music legend was.

“I might have known you’d never make a wife because you gave up the only one that ever loved you and went back to the wild side of life.”

Colter threw him a sassy smirk as she prepared for her part of the duet. Right from the first note, Colter’s voice resonated throughout the arena. Her powerful voice brought life to the song lyrics.

“Too many times married men think they’re still single. That has caused many a good girl to go wrong.”

After a couple verses, Colter danced toward Jennings. She jokingly encouraged her hubby to sing again making the audience die of laughter. Jennings was quick to snap back with the response, “That hurt my feelings…” but before his wife could respond he was back in front of the microphone for the second verse!

The couple switched off back and forth between verses for the ultimate power-filled duet! Smiles resided on both their faces the entire performance. Right after the last verse, Jennings grabbed Colter for a playful smooch by sticking his tongue out. She lovingly pulled away as the crowd threw up their applause for the fiery couple.

Watch Waylon Jennings and Jessi Colter light up the stage below.