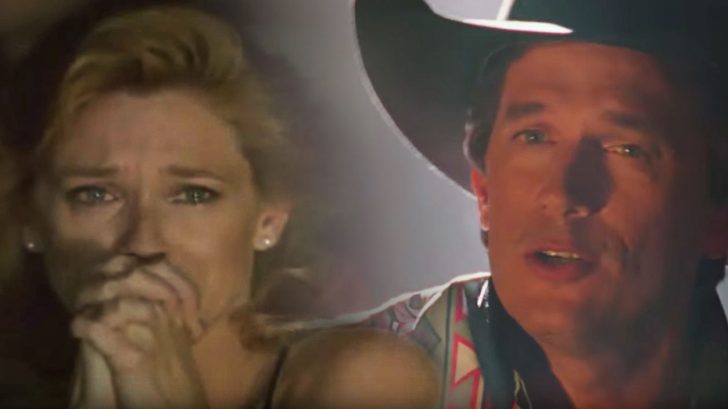 The King of Country brings her to tears with this truly unforgettable performance and heart-melting song.

George Strait is known for many songs, but his 1992 release of “I Cross My Heart” stands out as one of the most memorable and treasured hits ever released by the living legend.

Happy Birthday to George Strait, aka Dusty from the movie Pure Country. pic.twitter.com/zhdwEeWGEz

Written and recorded as part of his soundtrack for the famed country movie, Pure Country, Strait takes a starring role as the lead character but also recorded a full album to be released alongside the film.

"@GeorgeStrait's 'Pure Country' at 25: Inside the Guilty Pleasure Movie" (more must-see than guilty pleasure for us) https://t.co/RTWpOABUU6 pic.twitter.com/r6fd7cXQ7G

The movie follows the story of a man who is one of the biggest rising stars in country music who decides to forego his career in favor of a return to working on a farm. While on the farm, he falls in love with the farm owner’s daughter, Harley. Later, during a very intimate and toned-down show, he takes the stage in front of an audience that includes the woman of his dreams – Harley.

While playing one of the most emotional and sweet songs ever, Harley becomes visibly moved by the song as they stare into each other’s eyes across the room and she weeps tears of love and joy for her country hero.

24 years ago…. with George Strait at his Pure Country movie premiere pic.twitter.com/bSsuYkYhzB

Truly an amazing display of love and romance, this scene from Pure Country will melt your heart and bring you to tears!