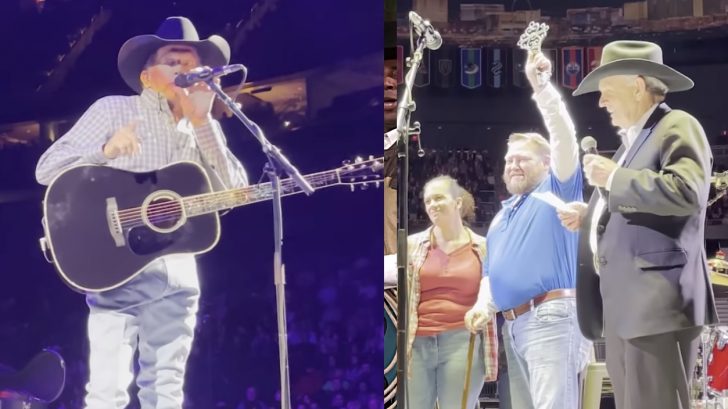 While on stage December 2 at the T-Mobile Arena in Las Vegas, Nevada, George Strait was doing his Strait To Vegas show when he paused to give help away a mortgage-free home to Purple Heart recipient, former U.S. Army Sergeant Mike Hulsey, and his wife.

Strait honored the U.S. military veteran in a special way as they all stood on stage while the Military Warriors Support Foundation’s founder and CEO Retired Lt. General Leroy Sisco helped Strait make the presentation.

“I want to introduce you to a hero on [this] stage tonight,” Sisco said talking about Sergeant Hulsey while the crowd in attendance cheered. “This hero was shot in the leg, then he was blown up three different times with an IED blast. He shattered his backbone, his neck and all that. And for all that to be fixed, [the doctors] had to replace his hips, both of them. And he did all of that for our freedom.”

Sisco then said that he and Strait were going to do something special for Sergeant Hulsey and his wife Megan and proceeded to present them with a key to a “beautiful” mortgage-free home.

Sisco gave the key to Strait who then handed it over to Hulsey who then held it up in the air as the crowd cheered in happiness for the deserving couple.

Sisco announced that in addition to the Military Warriors Support Foundation, Wells Fargo Bank, and the Homes4WoundedHeroes program, Strait has helped sponsor to pay for the home given to Hulsey and his wife.

Sisco then presented Strait with a custom belt buckle bearing the names of all the veterans he’s helped through his partnership with the Military Warriors Support Foundation.

According to the foundation’s official website, Strait who is a veteran himself, has worked with the foundation for 10 years to provide mortgage-free homes to veterans wounded in combat and Gold Star families.

He’s helped around 90 veterans and their families get homes in 32 states due to his participation.

“We are so thankful for our partnership with George Strait and for him allowing us to honor our heroes in this way,” Sisco said.

The foundation’s website also indicated that Strait usually brings each veteran onstage during his concerts to give them the homes, noting that it’s a “once-in-a-lifetime opportunity” for them to celebrate their service with Strait and his fans as they receive it.

“Seeing everybody standing up and cheering for those who protect our freedom is amazing,” the foundation’s Executive Director Ken Eakes said. “To be there, around all these folks that appreciate America so much, makes you understand how much people really do care about our military. It’s something this country still supports and understands why it’s so important for our freedom.”

Watch The Full Video Of The Onstage Home Giveaway Below