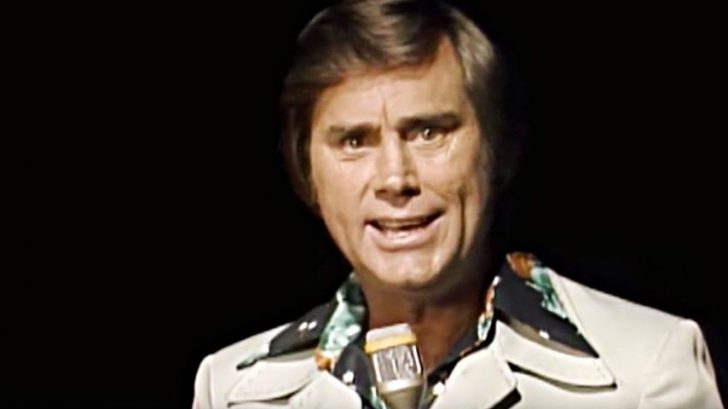 If you’re any kind of country music fan – you’ve heard of George “Possum” Jones. His name comes up in pretty much any discussion involving the genre’s history – with good reason!

Jones’ passion for music sparked at a very young age, receiving his very own guitar at age nine. Fast forward to the 1960s, his career was filled with hits across the board, leading into the 70s and 80s.

Appearing on Marty Robbins Spotlight – a syndicated show from the late ’70s hosted by Robbins – Jones serenaded the audience with one of his timeless songs, “The Race Is On.”

Jones had a unique way of placing himself in the shoes of the characters in his song.

Lovesick and kicked aside – Jones brought a contagious feeling of heartbreak to the “The Race Is On.” Written by Don Rollins after a day at Turf Paradise Race Course in Phoenix, AZ – it’s no wonder the lyrics of this 1964 single used thoroughbred racing as a metaphor for the singer’s romantic relationships.

With his recognizable baritone voice and distinctive features, the singer never bothered to wear a cowboy hat. But, there was no doubt George Jones was country through and through.

“The Race Is On” was first released as a single in 1964. The song peaked at number three on the Billboard Hot 100 in January 1965. After spiking on the country charts, the love song raced up to 96 on the pop charts, which was rare for any country song to achieve.

To capitalize on the wide popularity of the tune, Jones’ studio made it the title of his next 1965 LP. Ultimately, the song became a favorite of Jones and was sure to be played whenever he was in concert.

George “Possum” Jones, one of the greatest country hitmakers of all time, passed away at 81 years of age in 2013. The country music world misses him dearly, but his legacy will always live on in Honky Tonks across the globe.

Billboard: "George Jones – The Possum Gets Alt-Country Tribute on One-Year Anniversary of Death"STORY AT http://cwired.co/GJ14BBA #TeamGJ

You can watch George Jones’ performance below.