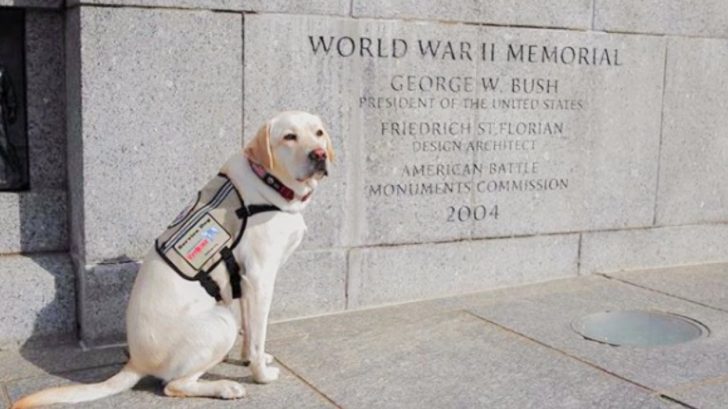 When former President George H.W. Bush passed away in November 2018, the nation went into mourning. While many tributes emerged in the aftermath of his passing, the most powerful came from his beloved canine companion, Sully.

The Labrador retriever was President Bush’s faithful service dog, and was always found by his side. He helped comfort the President after his wife, Barbara, passed away in April 2018.

Sully remained by President Bush’s side until the end, and even after it. Just days after the former President’s passing, Sully was photographed keeping vigil in front of his flag-draped casket.

“Mission complete,” read the simple, but powerful caption to the photo on social media.

After President Bush passed away, Sully went on to start his next mission. He now works as a  rehabilitation dog with veterans at the Walter Reed Medical Center in Bethesda, Maryland.

Those who wish to keep up with Sully are in luck, because the devoted dog has his own social media account. His Instagram is full of heartwarming photos, including one from when he met his namesake, pilot Chesley Sullenberger, the hero pilot known for “The Miracle on the Hudson.”

The two also appeared on the TODAY Show together.

Even though Sully is hard at work at his new job, he has never forgotten about his beloved former owner. So when Memorial Day rolled around, he took the time to honor him with a loving message and another sweet photo.

The photo shows Sully sitting at the National World War II Memorial. President Bush served in the Navy during WWII, and earned the Distinguished Flying Cross for his service.

His son, George W. Bush, was President when the National World War II Memorial was dedicated in 2004. In Sully’s photo, he can be seen next to a stone that displays the younger Bush’s name.

The photo’s caption contains a quote by Sully’s late owner, in which he recalled the reasons why we observe Memorial Day.

“Each of the patriots whom we remember on this day was first a beloved son or daughter, a brother or sister, or a spouse, friend, and neighbor,” read the quote.

In addition to including the quote, Sully’s post also took the time to recognize his beloved owner. It closed with the line, “Always thinking of my best friend & the bravest military in the world who made the ultimate sacrifice while defending our country for our freedoms.”

Sully’s sweet Memorial Day tribute perfectly captures how devoted he was to his beloved owner. Learn more about the special bond they shared by tuning in to the video below.